Felix Hernandez tossed seven strong innings and the Seattle Mariners effectively used the long ball to down the Los Angeles Angels of Anaheim by a 3-2 score Monday in the opener of a three-game set.

Nelson Cruz, Logan Morrison and Seth Smith each homered for the Mariners, who ended a four-game skid.

Felix Hernandez (5-0) surrendered just one run on six hits and one walk with eight strikeouts for his 130th career win, tying Randy Johnson for second all-time on the franchise's win list.

Matt Joyce and David Freese each provided solo blasts, while Erick Aybar and Albert Pujols had two hits for the Angels, who have dropped four straight and six of their last eight games.

Matt Shoemaker (2-2) gave up three runs on four hits and a walk and tied a career-high with 10 strikeouts over 7 1/3 innings.

The Mariners finally got to Shoemaker in the seventh. He allowed just one hit and two baserunners prior to making two costly mistakes.

Cruz led off the frame by clobbering a 1-2 changeup into the left-field seats for his league-leading 14th home run of the season and Morrison followed two batters later with a line-drive blast to right for a 2-0 lead.

In the home half, Joyce cut the deficit in half by crushing a 3-1 sinker to right center.

Smith got the run back and chased Shoemaker with a one-out solo shot in the eighth.

Fernando Rodney gave up a one-out homer to David Freese in the ninth and walked Joyce two batters later. Rodney earned his eighth save of the season after pinch runner Collin Cowgill was thrown out trying to steal second.

Seattle is 8-4 in their last 12 games at Angel Stadium ... Hernandez reached 1,995 strikeouts to pass Johan Santana for the most by a Venezuelan pitcher in Major League history ... Shoemaker recorded 10 strikeouts twice last season, the first in a 9-3 win over Cleveland on June 17 and again in 4-2 loss to the Orioles on July 21.

NHL // 1 hour ago
Josh Manson nets overtime winner, leads Avalanche over Blues in Game 1
May 18 (UPI) -- Defenseman Josh Manson flipped in a long-range wrist shot 8:02 into overtime to lead the Colorado Avalanche to a narrow win over the St. Louis Blues in Game 1 of a Western Conference semifinals series.

Sports News // 5 hours ago
PGA Championship 2022: Rahm, Scheffler favorites for golf's second major
May 18 (UPI) -- Jon Rahm and Scottie Scheffler are co-favorites to win the 2022 PGA Championship, the second major tournament of the PGA Tour season, which runs from Thursday through Sunday in Tulsa, Okla.

NBA // 8 hours ago
Heat 'inspired' by Jimmy Butler's 41 points in Game 1 win vs. Celtics
MIAMI, May 17 (UPI) -- Jimmy Butler poured in 41 points and the Miami Heat offense launched an explosive third-quarter comeback to beat the Boston Celtics 118-107 in Game 1 of the Eastern Conference finals on Tuesday at FTX Arena. 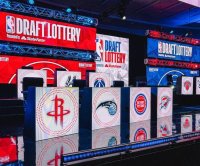