A game between the Orioles and White Sox scheduled for Monday night at Camden Yards was postponed after protests over the death of a man injured in police custody turned violent.

The Orioles said the decision to postpone the game was made after consulting with the Baltimore police department.

The team said a makeup date will be announced as soon as possible.

Riots erupted in the city following the Monday funeral of Freddie Gray, who was arrested April 12 and later died after suffering a severe spinal injury.

It wasn't the first time an Orioles game was affected by the citywide unrest.

Fans at Camden Yards were asked to stay inside the stadium at the conclusion of Saturday's game against Boston because of safety concerns before they were eventually given the OK to leave.

MLB // 11 hours ago
Cody Bellinger, Dodgers rally for 6-5 win over Braves in Game 3 of NLCS
Oct. 19 (UPI) -- Behind stars Cody Bellinger and Mookie Betts, the Los Angeles Dodgers stormed back to beat the Atlanta Braves 6-5 in Tuesday's Game 3 of the National League Championship Series at Dodger Stadium. 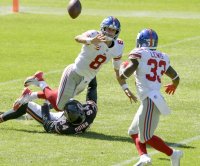