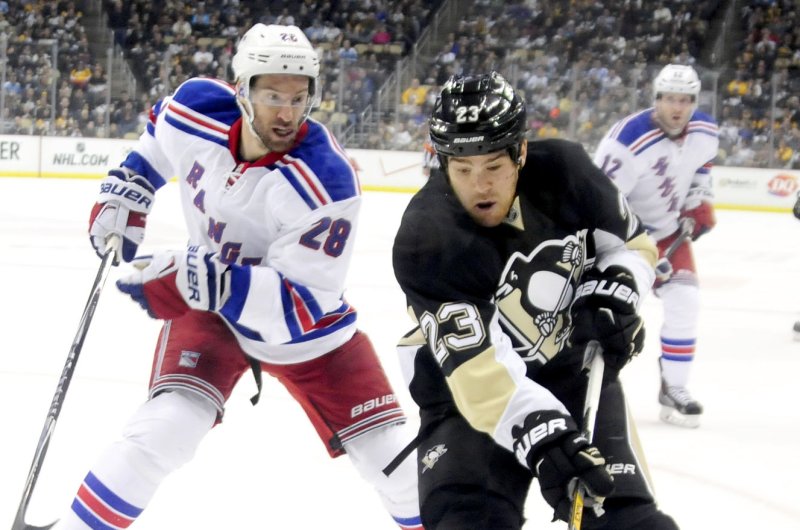 With the Los Angeles Kings failing to make the playoffs, there will be a new Stanley Cup champion in 2015. The New York Rangers -- last season's Eastern Conference champions -- are eager to fill the void left by the disappointing Kings.

While Los Angeles floundered in 2014-15, the Rangers appeared to grow even stronger since losing in five games during last spring's Cup Finals. New York not only claimed the Metropolitan Division title but also secured home-ice advantage throughout the playoffs by posting the best record in the regular season. The Rangers earned the franchise's first Presidents' Trophy since 1993-94, which also marked the last time the Blueshirts won a Cup.

After getting his club to the final round in his debut season with the Rangers, head coach Alain Vigneault heads into these playoffs as the favorite in the East. His club is perhaps the most balanced team in the entire NHL, as it ranked third in both goals scored (3.02 goals per game) and goals allowed (2.28 GPG) during the regular season.

Back for a fifth straight playoff appearance, the Rangers are still anchored by goaltender Henrik Lundqvist. However, "King Henrik" had some help this season in getting New York to claim the best record in the league.

When Lundqvist went down with a sprained blood vessel in his neck in early February, backup Cam Talbot came through in a big way. Lundqvist missed 25 games due to the vascular injury and Talbot went 15-3-3 with a 2.12 goals against average in his absence.

Lundqvist returned to the lineup on March 28 and made seven starts before the end of the regular season. The franchise goalie finished the campaign with a 30-13-3 record, 2.25 GAA and .923 save percentage. The 33-year-old Swede has been New York's best player for the past decade and has compiled a strong playoff resume over the years, registering a .922 save percentage and 2.24 GAA over 92 career postseason contests.

The Rangers boast a solid defense in front of Lundqvist, but New York enters the first round with one of its key blueliners on the shelf.

Kevin Klein tied for the team lead among defensemen in goals with nine and was second on the blue line with 26 points, but he is still out with a broken arm. Klein sustained a fractured left arm while blocking a shot from Washington's Alex Ovechkin on March 11 and sat out the final 16 games of the regular season. He will miss Game 1, but he could be available at some point in this series.

The good news for New York is it has plenty of depth on the back end. Ryan McDonagh is at the top of the rotation and led the defense with 33 points on eight goals and 25 assists. McDonagh's skating partner Dan Girardi was second to McDonagh in average ice time. Girardi had four goals and 16 assists, tying him with Marc Staal (5G, 15A) and Dan Boyle (9G, 11A) for third on the blue line in points.

In-season acquisition Keith Yandle, who came over from Arizona at the trade deadline, is a game-changing offensive weapon. He excels at joining the rush and posted 11 points (2G, 9A) in a 21-game stint with his new team.

On offense, all eyes will be on power forward Rick Nash, who turned in an excellent regular season but needs to prove himself all over again in the playoffs.

Nash led the Rangers with a career-high 42 goals and also paced the team with 69 points, matching another personal best. However, the winger struggled mightily in the 2014 postseason, posting just 10 points (3G, 7A) in 25 games and he didn't score his first goal until Game 1 of the Eastern Conference finals against Montreal.

Martin St. Louis has had the opposite problem, as he went through a down year in 2014-15 after carrying the Rangers' offense for a chunk of last spring's playoff run. St. Louis posted eight goals and seven assists during the 2014 postseason, but the 39-year-old winger only posted 52 points (21G, 31A) in 74 games during the regular season. It marked his lowest output since a 35-point campaign with Tampa Bay in 2001-02.

Although the Rangers have plenty of scoring depth, they're still counting on Nash and St. Louis to do their part on offense.

New York had 10 players reach double digits in goals this season, including eight with 15 or more tallies. Chris Kreider tied St. Louis for second on the club with 21 goals, while first-line centerman Derick Brassard was next with 19 markers.

The Rangers' main strength on offense is their speed, with Hagelin and Kreider leading the way in the skating department. The club's weakness, however, is on the power play. New York scored on just 12.6 percent of its chances with the man advantage in last year's playoffs and tied for 21st in the league in 2014-15 (16.8 percent).

Since winning the Cup in 2009, the Pittsburgh Penguins have been a playoff disappointment. They almost fixed that problem by nearly missing the postseason entirely this spring.

After losing in seven games to the Rangers during last season's conference semifinals, and blowing a 3-1 series' lead in the process, the Pens fired head coach Dan Bylsma and general manager Ray Shero. Who knows what they would have done if their late-season swoon in 2014-15 cost them a spot in the postseason?

Pittsburgh lost five straight before beating the Buffalo Sabres on the final day of the regular season to secure a playoff spot. The Pens went 4-9-2 over their final 15 games to nearly miss the postseason for the first time since 2006, when captain Sidney Crosby was a rookie.

Bylsma's replacement, Mike Johnston, was criticized plenty during his first season behind the Pittsburgh bench, but he faces the same problem as his predecessor -- a top-heavy lineup that offers little in the way of difference- makers after Crosby and fellow star centerman Evgeni Malkin.

Crosby finished third in the NHL with 84 points (28G, 56A) and Malkin was in the scoring race for a large part of the season before he was slowed by injury. Malkin would up with 70 points (28G, 42A) in 69 games.

However, from an overall standpoint the Pens offense was less than impressive in 2014-15, averaging just 2.65 goals per game to rank 19th in the league. That marked a big drop-off from 2013-14 when Pittsburgh had the fifth-best offense by averaging 2.95 goals per tilt.

Meanwhile, the club's defensive numbers were the same as the Pens allowed 2.49 goals per game in each of the last two regular seasons.

Pittsburgh will have to get by without top defenseman Kris Letang, who suffered a concussion on March 28 and is not likely to be available in the postseason no matter how far the Penguins get. It's a huge loss for the Pens, as Letang led the club in average ice time with 25 minutes, 29 seconds per game. He also was by far the team's best offensive weapon from the back end with 54 points on 11 goals and 43 assists and Pittsburgh doesn't have another guy to replace what Letang brings to the power play.

Paul Martin, who was second on Pittsburgh's blue line with 20 points, will assume the No. 1 defensive role with Letang sidelined indefinitely. Martin will likely be paired with Ben Lovejoy, who had one goal, two assists and a minus-seven rating in 20 games following a trade with Anaheim on March 2.

With Letang already sidelined, the Pens are hoping Christian Ehrhoff can go in Game 1 and skate alongside Ian Cole on the second pairing. Ehrhoff missed the last nine regular-season games with an upper-body injury, but did participate in Tuesday's practice and has been deemed "day-to-day" by Johnston.

Rob Scuderi, Taylor Chorney and Derrick Pouliot also will be in the mix for Pittsburgh's defense. Brian Dumoulin also could see time if Ehrhoff is unable to start the series.

Marc-Andre Fleury is back for another postseason between the pipes. The veteran netminder has earned the reputation as an erratic playoff goaltender, but he is coming off another strong regular season.

The 30-year-old Fleury went through consecutive rough playoff runs in 2012 and '13 but he bounced back last spring with a 2.40 GAA and .915 save percentage in 13 games. Pittsburgh may need him to be even better than that if they are going to knock off the reigning East champions in Round 1.

After storming back to defeat Pittsburgh in last season's playoffs, the Rangers posted a 3-0-1 record in four meetings during the 2014-15 season series. New York outscored the Pens by a 16-8 margin this season, but the clubs haven't faced each other since the Blueshirts won 5-2 in Pittsburgh on Jan. 18.

Nash had a tremendous showing in the season series, posting four goals and three assists against the Pens this season. Brassard and St. Louis each added five points on two goals and three helpers, while Stepan notched four points (2G, 2A) over the four meetings.

The Rangers own a sizeable depth advantage over Pittsburgh at both ends of the ice and Letang's injury only makes the situation worse for the Pens. Expect New York to dictate the pace of the series with its speed and for the Penguins to pray Fleury can steal a game or two.