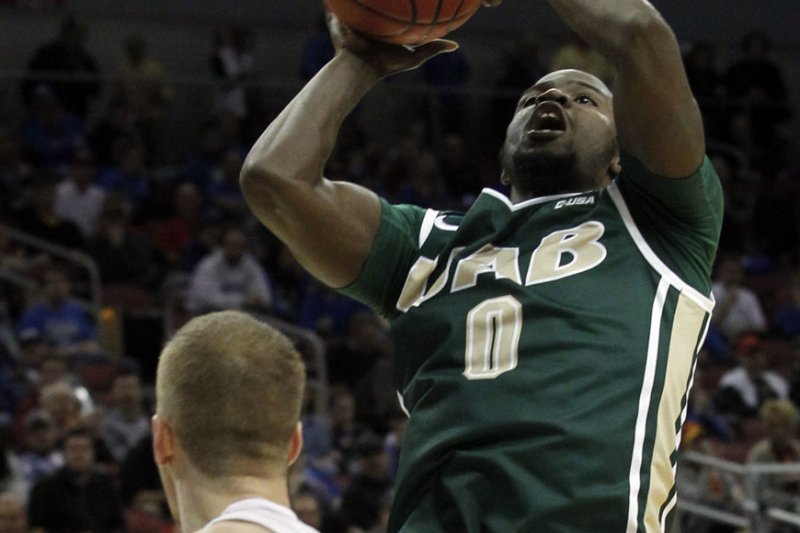 UAB Blazers' Hakeem Baxter (0) fights to get his shot off under pressure from Iowa State Cyclones' Jameel McKay (1) during the second half of play in their second round games of the 2015 NCAA Division I Men's Basketball Championship at the KFC Yum! Center in Louisville, Kentucky, March 19, 2015. Photo by John Sommers II/UPI | License Photo

UAB Blazers' Chris Cokley (3) dunks the basketball overtop Iowa State Cyclones' Monte Morris (11) during the second half of play in their second round games of the 2015 NCAA Division I Men's Basketball Championship at the KFC Yum! Center in Louisville, Kentucky, March 19, 2015. Photo by John Sommers II/UPI | License Photo

UAB Blazers' Tosin Mehinti (21) fights for the loose ball with Iowa State Cyclones' Abdel Nader (2) during the first half of play in their second round games of the 2015 NCAA Division I Men's Basketball Championship at the KFC Yum! Center in Louisville, Kentucky, March 19, 2015. UPI/John Sommers II | License Photo

Lee ended with 14 points and 12 rebounds and Robert Brown scored a game-high 21 points to lead UAB (20-15), which moved on to the third round to face either sixth-seeded SMU or 11th-seeded UCLA.

Monte Morris scored 15 points to lead Iowa State (25-9), which got off to a quick start but failed to hold on to a lead and saw its recent run of good luck come to an end.

The Cyclones entered the NCAA Tournament having won five straight games, including three in a row to capture the Big 12 Conference Tournament, where they trailed by double-digits in every game.

Down 51-49 after Brown tipped in a rebound with 5:14 left, the Cyclones scored the next six points to finally build a lead at 55-51. Georges Niang's two free throws with 3:13 on the clock ended the run, giving Iowa State the largest lead of the half by either team.

During the spurt, the Blazers struggled from the field, hitting just 1-of-7 field goal attempts dating back to the 7:12 mark.

However, strong defense down the stretch gave UAB a chance. Lee's basket with 1:36 left drew the Blazers within 55-53. Then, after forcing Iowa State into a shot clock violation with exactly one minute left, Brown came out of a timeout and drained a 3-pointer with 51 seconds left for a slim 56-55 edge.

The trey ended an 0-for-9 drought from beyond the arc for UAB.

Morris answered with a jumper with 39 seconds left to give Iowa State the lead, but Lee got it back with jumper 15 seconds later.

Niang then had a shot blocked with 13 seconds left and fouled Lee, who hit both free throws with 12 seconds to play for a 60-57 edge.

The Cyclones had a chance to tie the game, but Naz Long's 3-pointer with four seconds left rimmed out and Morris' tip in with 7/10ths of a second remaining wasn't enough as UAB escaped with the upset.