Chicago Bulls center Joakim Noah (C) reacts after he was fouled by Cleveland Cavaliers forward LeBron James (L) during the fourth quarter at the United Center on February 12, 2015 in Chicago. The Bulls defeated the Cavaliers 113-98. Photo by Brian Kersey/UPI | License Photo

The playoffs should be a sure thing for the Chicago Bulls, as they shoot for a fifth consecutive win Friday against the Detroit Pistons at The Palace of Auburn Hills.

The Bulls are back on the floor following the All-Star break and recorded their fourth win in a row with last Thursday's 113-98 victory over LeBron James and the Cleveland Cavaliers. James had 31 points on 12-of-26 shooting.

Derrick Rose made 12 of his 24 shots en route to 30 points for the Bulls and Tony Snell scored 22 points. Pau Gasol and Joakim Noah recorded double- doubles, as Gasol posted 18 points and 10 rebounds. Noah chipped in 10 points to go along with 15 boards for the Bulls, who scored more points in every quarter and had 24 off 16 Cleveland turnovers.

"We were just happy to (enter the All-Star break) on a good note," Rose said. "We played decent basketball tonight."

Chicago, which is third in the Eastern Conference, will try for its third straight road win and is one of the top away teams this season with a 19-9 record. After visiting Detroit, the Bulls will begin a seven-game homestand Saturday versus Phoenix, Milwaukee, Charlotte, Minnesota, LA Clippers, Washington and Oklahoma City.

The Bulls are 11-3 on the road against Eastern Conference foes.

Detroit is still alive for a postseason spot in the weak East and are two games off the eighth and final spot.

The Pistons have lost seven of their last 11 games, and headed to the break following last Wednesday's 104-87 setback to the San Antonio Spurs in the opener of a five-game homestand.

"Their offense was very good and we were a step slow. I thought we really fought hard," said Pistons coach Stan Van Gundy.

Van Gundy's squad has lost back-to-back home games and is 10-18 at The Palace this season. The Pistons will also host Washington, Cleveland and New York on the residency.

Detroit did not sit quietly before Thursday's trade deadline and was involved in a three-team deal with the Oklahoma City Thunder and Utah Jazz.

The Thunder received Enes Kanter and 3-point specialist Steve Novak from the Jazz and got Augustin and forward Kyle Singler from Detroit. In exchange, Oklahoma City shipped young guard Reggie Jackson to the Pistons and sent veteran center Kendrick Perkins to Utah.

Utah also received rookie forward Grant Jerrett, the rights to German center Tibor Pleiss and a future first-round pick from Oklahoma City, as well as a 2017 second-round pick from Detroit.

It didn't stop there.

The Boston Celtics dealt forward Tayshaun Prince to the Pistons and acquired point guard Isaiah Thomas from Phoenix. In exchange for Prince, who played his first 10-plus seasons for Detroit, the Celtics got forwards Jonas Jerebko and Gigi Datome from the Pistons.

Prince, 34, won an NBA title with the Pistons in 2004. He was traded to the Memphis Grizzlies in a three-team deal in January 2013 and was acquired by Boston last month in another three-team deal also involving New Orleans.

Detroit sustained a 102-91 loss in Chicago on Nov. 10 and Rose led the charge with 24 points. Gasol compiled 17 and 15 rebounds, while the Pistons received 16 points and 10 boards from Greg Monroe.

The Bulls and Pistons will meet again March 21 and April 3. Chicago has won three in a row and 22 of the last 24 games in this series.

Sports News // 4 minutes ago
Watch: Gymnast Simone Biles teases groundbreaking flips
Feb. 21 (UPI) -- Star gymnast Simone Biles has a new move. She posted a video of the multiple-flip Yurchenko double pike on social media after previously teasing that she could break out the move at the 2020 Summer Olympics in Tokyo.

NFL // 7 hours ago
Marshawn Lynch to have 'substantial' role in HBO's 'Westworld'
Feb. 21 (UPI) -- NFL running back Marshawn Lynch will appear in the new season of HBO's "Westworld." 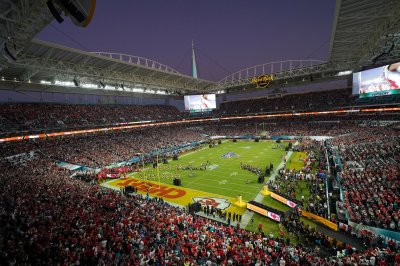