Tampa Bay Rays Wil Myers runs home after hitting an inside the park home run in the 3rd inning against the New York Yankees at Yankee Stadium in New York City on May 4, 2014. UPI/John Angelillo | License Photo

The San Diego Padres continued to reshape their roster Friday, acquiring outfielder Wil Myers from the Tampa Bay Rays as part of an 11-player trade that also involved the Washington Nationals.

The Padres picked up Myers, the 2013 American League Rookie of the Year, along with catcher Ryan Hanigan and minor league pitchers Gerardo Reyes and Jose Castillo from the Rays.

Tampa Bay received catcher Rene Rivera, minor league first baseman Jake Bauers and pitcher Burch Smith from the Padres, as well as outfielder Steven Souza and pitcher Travis Ott from Washington. The Nationals will pick up pitcher Joe Ross and a player to be named later, said to be shortstop Trea Turner, from the Padres.

Myers, who just turned 24 years old, is the centerpiece of the trade.

The Rays acquired Myers from Kansas City prior to the 2013 season in the deal that sent pitchers James Shields and Wade Davis to the Royals.

Hanigan hit just .218 in 84 games last season, his first in Tampa Bay after playing the first seven years of his career in Cincinnati. The 34-year-old veteran, who has played more than 100 games in a season just once, is a career. 256 hitter with 25 homers and 172 RBI in 558 games.

The Padres have been busy since the start of last week's Winter Meetings, signing pitcher Brandon Morrow while adding outfielder Matt Kemp and catcher Derek Norris in trades with the Dodgers and Athletics, respectively. San Diego is also set to acquire outfielder Justin Upton from Atlanta in a trade that has yet to be announced officially.

"This is a baseball trade, and one we believe will make our club more competitive both for 2015 and beyond," said Silverman in a statement Friday. "Trading Wil Myers was not an easy decision, but we are very excited about the talent coming back our way, and this deal has potential to improve our team on both sides of the ball."

The Rays, who also released veteran catcher Jose Molina this offseason, will hope Rivera can help behind the plate. The 31-year-old native of Puerto Rico played in a career-high 103 games last season with the Padres and batted .252 with 11 homers and 44 RBI.

Burch appeared in 10 games in 2013, including seven starts, and was 1-3 with a 6.44 ERA. He missed most of last year with a forearm injury. Bauers played at Single-A in 2014. Ott was also a Class-A player last year in Washington's organization, while Souza could be the key piece for the Rays.

Souza was the International League's top player in 2014 for Washington's Triple-A affiliate in Syracuse, batting .350 with 18 homers and 75 RBI in just 96 games. The 25-year-old played in 21 games for the Nationals last year and hit two homers in 23 at-bats, while also making a tremendous catch to preserve Jordan Zimmermann's no-hitter on the final day of the season.

The Nationals will pick up a former first-round pick in Ross, a 21-year-old right-hander who has not pitched above Double-A since he was chosen 25th overall in 2011.

Turner can't officially be traded until next June, as league rules mandate that a draft pick cannot be dealt until a full year after he was selected. The 13th overall pick last June, he could be Washington's shortstop of the future with Ian Desmond set to be a free agent after next season.

Sports News // 13 hours ago
Kentucky Derby: Prospective field set for 20 Thoroughbreds
April 12 (UPI) -- With all the preliminaries in the book, here's how the field shapes up for the May 1 Kentucky Derby.

MLB // 14 hours ago
Red Sox's J.D. Martinez hits three homers in win vs. Orioles
April 12 (UPI) -- J.D. Martinez started his day with a strikeout, but went on to smack three home runs to lead the Boston Red Sox to a 14-9 victory over the Baltimore Orioles in Baltimore. 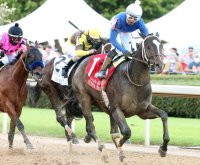 Sports News // 14 hours ago
Kentucky Derby field set in weekend racing
April 12 (UPI) -- Another big weekend of Thorougbred racing at Keeneland and Oaklawn Park set the tentative field field for the May 1 Kentucky Derby amid some fascinating battles among the sprinters and turf specialists.