The Philadelphia Phillies took a 5-2 decision from the Atlanta Braves in the second tilt of a three-game set.

Ryan Howard homered to back a strong start from Kyle Kendrick as the Philadelphia Phillies took a 5-2 decision from the Atlanta Braves in the second tilt of a three-game set.

Kendrick (3-6) tossed seven innings of two-run ball, conceding six hits and a walk with six strikeouts for the Phillies, who have taken the first two of this series and won six of eight overall.

Carlos Ruiz, Reid Brignac and Cesar Hernandez each had two hits, with Hernandez adding an RBI.

Ervin Santana (5-4) was charged with four runs -- three earned -- on eight hits and three walks over six innings of work to take the loss.

Jason Heyward had a double among his two hits and knocked in a run for Atlanta, which has dropped five of its last seven games.

Jimmy Rollins doubled to lead off the game for Philadelphia and Howard blasted an opposite-field shot -- his second in as many days -- two batters later to give the Phillies a 2-0 lead. Domonic Brown followed by slapping a single into right and John Mayberry walked before Brignac flied out to right to end the inning.

Philadelphia added on with two more in the fourth. Brown walked to start the inning, moved over to third on Brignac's double to left center and hustled home on a passed ball by Atlanta catcher Gerald Laird. Hernandez then drove Brignac in with a single to center.

Laird opened the home half of the fifth with a walk, moved over to second on a sacrifice bunt from Santana and scored on a Heyward single to center.

Atlanta threatened in the seventh with runners at the corners and no outs, but Kendrick worked his way out of trouble to allow one run and stay in line for the win.

Chris Johnson stroked a double to right center to start the inning, then Andrelton Simmons lined a single in-and-out of the glove of Marlon Byrd in right.

Laird stepped in and grounded into a 6-3 double play that plated Johnson before Kendrick struck out Jordan Schafer to end the inning.

The Phillies added an insurance run in the ninth thanks to Simmons' second error of the inning. Byrd reached on an infield single and advanced to second on Simmons' throwing error, and after a walk to Howard, stole third and scored when Brown reached on another miscue from the Braves' shortstop.

Jonathan Papelbon, who blew his second save opportunity of the season in Monday's opener, hurled a perfect ninth to record his 16th save. 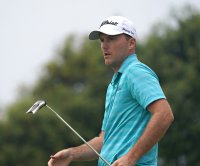 Sports News // 21 hours ago
Hughes, Oosthuizen, Henley lead entering U.S. Open final round
June 19 (UPI) -- Mackenzie Hughes, Louis Oosthuizen and Russell Henley were locked in a three-way tie atop the leaderboard after the third round of the U.S. Open golf tournament Saturday at Torrey Pines in San Diego.