Despite impressive Major League debuts from starters Chase Whitley and Jacob deGrom, it was a veteran outfielder who played the biggest role in the finale of the annual Subway Series.

Despite impressive Major League debuts from starters Chase Whitley and Jacob deGrom, it was a veteran outfielder who played the biggest role in the finale of the annual Subway Series.

Alfonso Soriano doubled in the game's only run in the seventh, while Dellin Betances struck out six of the seven hitters he faced in relief of Whitley to help the New York Yankees secure a 1-0 win over the New York Mets on Thursday at Citi Field.

Whitley, who got the call in place of an injured CC Sabathia, held the Mets to two hits and two walks before being pulled in the fifth with two outs and runners on second and third.

Betances (2-0) entered and grounded out Eric Young, Jr. before striking out the side in the sixth, and then again in the seventh after Soriano had broken the scoreless deadlock in the top of the frame.

The 25-year-old deGrom, meanwhile, got the nod for the Mets after Dillon Gee was placed on the disabled list Wednesday due to a strained right lat muscle. The right-hander struck out six over six scoreless frames before yielding the game's only run in the seventh.

Mark Teixeira worked a one-out walk, but was quickly retired when Brian McCann followed with a grounder to second baseman Daniel Murphy. Murphy fired to second to start a potential inning-ending double play, but David Wright's relay through skipped past Lucas Duda at first, allowing McCann to reach safely to extend the inning.

Two pitches later, Soriano stroked a double into the gap in left-center field and McCann hustled around from first for a 1-0 lead.

Scott Rice replaced deGrom to start the eighth and issued back-to-back one-out walks to spell the end of his outing.

Jeurys Familia took over on the mound and uncorked a wild pitch to move both runners into scoring position, but the Mets right-hander got Derek Jeter to smack a chopper to shortstop Ruben Tejada, who fired home to nab Kelly Johnson at the plate. Josh Edgin then flied out Jacoby Ellsbury to end the inning.

The Mets put runners on the corners with two outs in the eighth against Adam Warren following Murphy's two-out single to left, but closer David Robertson got Wright to ground out weakly to short to maintain the Yankees' slim margin.

Robertson retired the Mets in order in the ninth to nail down his seventh save of the season and complete the three-hit shutout.

NFL // 3 hours ago
Bill Belichick: Tom Brady's move to Buccaneers wasn't about 'not wanting him'
Sept. 27 (UPI) -- Bill Belichick wanted Tom Brady to stay with the New England Patriots instead of leaving for the Tampa Bay Buccaneers two seasons ago, the quarterback's former coach said Monday. 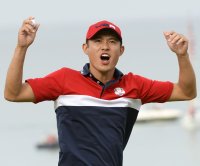 Sports News // 20 hours ago
Ryder Cup golf: USA dominates Europe to claim title
Sept. 26 (UPI) -- World No. 3 Collin Morikawa tied No. 14 Viktor Hovland of Norway in the fifth of a dozen singles golf matches to clinch the Ryder Cup title for the Americans on Sunday at Whistling Straits Golf Course in Sheboygan, Wis.