The Chicago Blackhawks claimed a 2-1 victory over the Minnesota Wild in Game 6 of this Western Conference semifinal.

Patrick Kane's tally at 9:40 of overtime was the game and series winner, as the Chicago Blackhawks claimed a 2-1 victory over the Minnesota Wild in Game 6 of this Western Conference semifinal.

Minnesota outplayed Chicago through the first half of the extra session, but the final break went to the defending champions. A point shot from Brent Seabrook hit the stanchion behind the Wild net and bounced back into play. Peter Regin missed the puck on the right side, but Kane trailed and lifted a backhander under the crossbar to end the best-of-seven set.

Kris Versteeg also scored and Corey Crawford came up with 34 saves for the Blackhawks, who claimed a 4-2 series win and await the winner of the Kings- Ducks battle in the conference finals.

Erik Haula picked up the lone goal for the Wild, while Ilya Bryzgalov stopped 25 shots in the season-ending setback.

NBA // 3 hours ago
76ers' Ben Simmons to miss at least two weeks with nerve issue in lower back
Feb. 25 (UPI) -- Philadelphia 76ers star Ben Simmons will be out for an extended period of time due to a nerve impingement in his lower back.

NFL // 7 hours ago
NFL Scouting Combine: Joe Burrow won't block move to Bengals
INDIANAPOLIS, Feb. 25 (UPI) -- Heisman Trophy and National Championship winning quarterback Joe Burrow said he would not try to block a move to the Cincinnati Bengals if the franchise selects him with its No. 1 first-round pick in the NFL Draft.

NFL // 8 hours ago
Tua Tagovailoa announces pro day, willingness to be rookie backup
INDIANAPOLIS, Feb. 25 (UPI) -- Former Alabama quarterback Tua Tagovailoa will hold a personal pro day April 9, when he expects to be healthy enough to "do everything" for NFL scouts after sustaining a season-ending injury last year. 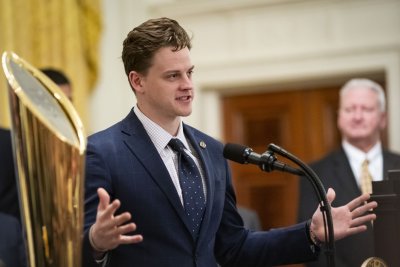