Attention centers on the California Chrome's Triple Crown chances but there are plenty of interesting races around the globe to keep punters busy while waiting for the Preakness Stakes. 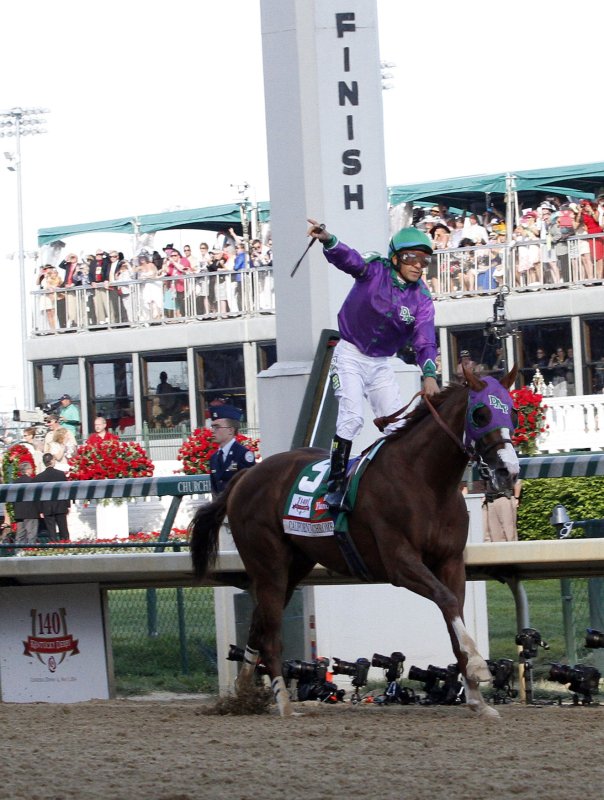 Victor Espinoza, aboard California Chrome, celebrates as they cross the finish line and to win the 140th running of the Kentucky Derby May 3, 2014 in Louisville, KY. UPI /Frank Polich | License Photo

The weekend between the Kentucky Derby and the Preakness Stakes, as usual, focuses on the chances for a Triple Crown winner. But there are several other races worthy of note worldwide.

At Belmont Park, some top turf runners will be on display in the Grade I Man o' War and a pair of 1-mile races should sort out some things in that area. And 3-year-olds not headed for the Preakness might show up in the Grade II Peter Pan.

Internationally, Sunday is the Group 1 NHK Mile in Japan and final preparation for the following weekend's international races in Singapore.

Kentucky Derby winner California Chrome jogged a mile at Churchill Downs Wednesday morning in his first appearance since a rousing win the Run for the Roses. The modestly bred colt, who captured the imagination of supporters of the "little guy," seemed none the worse for his 1 1/4-miles exertion last Saturday. "It went well," said 77-yeasr-old trainer Art Sherman. "He wanted to train. He was tired of walking." The field for the May 17 Preakness at Pimlico in Baltimore continues to evolve. An interesting prospect is Ria Antonia, winner by disqualification of last fall's Breeders' Cup Juvenile Fillies and was sixth in the Kentucky Oaks. Originally trained by Jerimiah Engelhart, she was saddled by Bob Baffert in the Oaks but now is under the care of Tom Amoss. He said the Preakness decision will involve "how she trains, how she works and how she comes out of her work." Few of California Chrome's Kentucky Derby rivals are expected for the Preakness. But the Baltimore race is looking for Illinois Derby winner Dynamic Impact and Tampa Bay Derby winner Ring Weekend. Meanwhile, look for possible Belmont Stakes candidates in Saturday's $200,000, Grade II Peter Pan Stakes at Belmont Park, which drew a field of seven 3-year-olds to go 9 furlongs on the main track. Among them is Our Caravan, who won the Calder Derby at the same distance by 9 lengths in his last start, beating Ring Weekend, Cleburn and Gaining Ground, among others. Perhaps more important, he contested the Grade II Holy Bull at Gulfstream Park earlier in the year, a key race for most of the participants. Todd Pletcher has two, including Comissioner, who couldn't quite get the job done in the Fountain of Youth, Sunland Derby or Arkansas Derby, and Matterhorn, a Tapit colt owned by Coolmore who has been struggling. Wayne Catalano will saddle Irish You Well, who finished third in the Illinois Derby. The morning-line favorite is Tonalist, another Tapit colt who missed the early Triple Crown rigors with a lung infection but now is pronounced ready by trainer Christophe Clement, so said, "I'm excited. Let's go."

A case can be made for any of the seven expected to line up for Sunday's $400,000, Grade I Man o' War. Grandeur has bounced back and forth between England and North America, finishing seventh in the Arlington Million last season. He comes off a win at Lingfield. Imagining comes off a runner-up finish in the Grade I Gulfstream Park Turf Handicap. Vertiformer finished second to Newsdad in his last outing in the Grade II Pan American at Gulfstream. Frac Daddy was a winner last time out in the Grade III Ben Ali over the Keeneland all-weather course. Lucayan has been in the money in three straight graded stakes, all in California. And Amira's Prince has not missed the trifecta in six U.S. starts since his arrival from Ireland. That string includes a pair of Grade II wins. Real Solution, winner of last year's Grade I Arlington Million via disqualification, finished his 2013 season with a ninth-place finish in the Breeders' Cup Turf and looked like he needed the race while finishing fourth in his seasonal debut in New Orleans.

A salty field of six is set to shake it up in Sunday's $250,000, Grade II Ruffian Handicap at 1 mile around the sweeping main course. My Wandy's Girl, who was dominant at Camarero in Puerto Rico earlier in her career, finally got her first mainland graded win last time out in the Grade II Barbara Fritchie at Laurel Park. Several others are looking to emulate that comeback pattern. Fiftyshadesofhay hasn't won since landing the Grade III Iowa Oaks at Prairie Meadows last June but seems to run better when she is outside California. Grace Hall has not visited the winner's circle since the Grade II Indiana Oaks at Hoosier Park in October but earlier was a multiple graded stakes winner. Toasting, Parc Monceau and Six Queens round out the field. The latter is a lightly raced but improving 5-year-old mare owned by Godolphin.

It's Palace Malice against just three rivals in Sunday's $150,000, Grade III Westchester Stakes at Belmont's one-turn mile. Palace Malice, a Curlin colt, won the Belmont Stakes last year, going half again as far, and more recently has been victorious in the Gulfstream Park Handicap at 1 mile and the New Orleans Handicap at Fair Grounds, going 1 1/8 miles. Trainer Todd Pletcher also has entered Red Rifle, who is likely to ensure an honest pace. Nick Zito will saddle Declan's Warrior, who has struggled since finishing second in the Grade II Woody Stephens over the Belmont track last June. He was absent for seen months after being eased and vanned off after the Grade I King's Bishop at Saratoga in August but finished a respectable second in a prep race at Gulfstream. I'm Steppin It Up comes from the ranks of the Calder optional claiming community.

Seven signed on for Saturday's $100,000, Grade III Lazaro Barrera Stakes for 3-year-olds at 7 furlongs. Tonito M. comes from Camarero, where the Rock Hard Ten colt won six of seven starts. Jerry Hollendorfer handles him now and also sends out Puppy Manners on Saturday. Kobe's Back is back from his East Coast trip, looking for his third career win. With hockey still going hot and heavy, Chelios might be a good hunch bet as he steps up to graded stakes level.

Nine are entered for Sunday's $150,000 (Canadian), Grade III Vigil Stakes at 7 furlongs on the all-weather. It's a mix of recent returnees from warmer climes and locals coming out of winter hibernation. Among them are the top three finishers in last month's Jacques Cartier Stakes. Occasional View comes off a victory in the Grade III Commonwealth Stakes at Keeneland in his last outing.

Sunday's NHK Mile at Tokyo Racecourse is the first of three springtime Group 1 mile races in Japan, followed by the Victoria Mile and the Yasuda Kinen. The NHK Mile, run left-handed, is open only to 3-year-olds and normally attracts those who aren't judged likely to get the distance of the Japan Derby or Japan Oaks. It was, however, won in 2004 by King Kamehameha, who not only went on to win the Japan Derby but then proceeded to make a deep impact on Japanese racing as a sire. Pun intended. In Sunday's race, Mikki Isle will be looking for his fifth straight win. Shonan Archive comes off a win in the Group 2 New Zealand Trophy at Nakayama despite missing the break. Atom has had some traffic troubles in the past. But he did beat Mikki Isle before the start of the latter's win streak. And Atom, a Deep Impact colt, has serious American grass mile lineage from his damsire, Rahy.

The 3-year-old set is on display Sunday at Longchamp in a pair of Group 1 events. The Poule d'Essai des Poulains for colts has 14 entered, including Giovanni Boldini, who disappointed with a fourth-place finish in the UAE Derby in Dubai on World Cup night. The Poule d'Essai des Poulains for fillies has 16 with many eyes on Lesstalk In Paris, who is 3/4 length shy of being undefeated in four career starts and Indonesienne, the only filly who has beaten Lesstalk In Paris. These are always interesting races with developing youngsters from several countries mixing it up.

The fields continue to coalesce for the May 18 international Group 1 fixtures at Kranji but it's for sure Hong Kong will be well represented while the United States and Japan make rare appearances. Military Attack is due back to defend his crown in the 2,000-meters Singapore Airlines International Cup and Lucky Nine ditto in the KrisFlyer Sprint at 1,200 meters. Dan Excel and Dubai winner Sterling City also are expected to make the journey from Hong Kong for the KrisFlyer. Mull of Killough is expected to represent England in the Cup. Limaro, a German-bred, comes from Dubai. Two countries not seen recently in the Singapore fixture will be there this year in the form of Tokei Halo from Japan and Si Sage from America, under the care of trainer Darryl Vienna. The Sprint also has a talented international cast beyond Hong Kong's stars.

NFL // 2 days ago
Ex-Patriots lineman crashed car to avoid being released
Aug. 5 (UPI) -- Former NFL offensive lineman Rich Ohrnberger once purposely crashed his car when he was running late on his way to a New England Patriots practice so that he could avoid a potential release, he said Friday.

NFL // 2 days ago
Raiders win NFL preseason opener, Jaguars' No. 1 pick Walker logs sack
Aug. 5 (UPI) -- The Las Vegas Raiders piled up 321 yards of offense and allowed just one score on defense to earn a 27-11 win over the Jacksonville Jaguars in the Hall of Fame Game, the NFL's annual preseason opener.

Sports News // 2 days ago
Life Is Good, Olympiad square off in the Whitney, highlighting weekend racing
Aug. 5 (UPI) -- A heavyweight edition of the Grade I Whitney and an internationally flavored turf tilt at Saratoga top a rich weekend schedule as horse racing hits its summertime stride.