Emiliano Grillo, after a 62, leads Africa Open by 2 strokes

Grillo, who had a 63 in the second round, had nine birdies in the third round and is at 20-under 193 after 54 holes. He's two stokes up on Oliver Fisher, who turned in a 66 Saturday.

Second-round leader John Hahn, who had a 61 Friday, had two birdies and two bogeys Saturday for an even-par 71 and is tied with Thomas Aiken (66 Saturday) and Richard Bland (64) for third at 16-under.

The second round was stopped for 90 minutes due to rain Friday, and several players had to finish that round Saturday. Fog caused a 30-minute delay at the start of the third round.

Fisher had an up-and down round until the closing holes. He was 1-under through 13 after four birdies and three bogies. But he posted birdie at the par-5 16th and eagled the 318-yard, par-4 16th, and then closed with a birdie to keep within two strokes of Grillo.

Grillo had five birdies in a six-hole span of the first nine and the other four over Nos. 12-16 of the second nine. 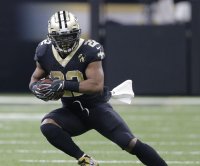 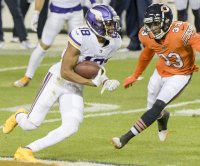