Gustavsson, who will be on the Swedish team at next month's Winter Olympics, allowed only a power-play goal to Brendan Gallagher in the second period.

Detroit needed just 26 shots to pick up its four goals and hand the Canadiens their third straight loss.

Henrik Zetterberg's power-play goal opened the scoring midway through the second period. Riley Sheahan and Niklas Kronwall produced second-period scores and Gustav Nyquist tacked on a goal with 1:19 to play in the third. 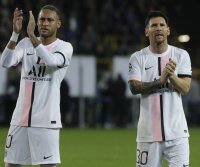