DENVER, Jan. 9 (UPI) -- Paul Stastny tied the game with 2:20 left in regulation Wednesday and then set up Tyson Barrie's overtime goal that gave Colorado a 4-3 win over Ottawa.

Barrie scored 33 seconds into the extra session, allowing the Avalanche to improve to 4-1-1 on their season-long, seven-game homestand.

Colorado scored the first two goals of the game and then had to make a dramatic comeback as time was running down in the third period.

Jamie McGinn and Jan Hejda gave the Avalanche a 2-0 lead before the game was five minutes old, but by the end of the second period Ottawa had the lead on goals by Clarke MacArthur, Jason Spezza and Kyle Turris.

Stastny delivered the only goal of the third period. Gabriel Landeskog assisted on three of the four Colorado goals, including the game-winner.

Semyon Varlamov, who will be on Russia's Olympic roster next month, made 29 saves to get the win. Craig Anderson stopped 27 shots for the Senators, who had a four-game winning streak snapped.

Sports News // 15 hours ago
Watch: Medvedev calls official 'small cat' in rant at Australian Open
Jan. 28 (UPI) -- Daniil Medvedev advanced to the Australian Open final Friday in Melbourne, despite an on-court rant directed at the chair umpire in the second set of the semifinal victory. 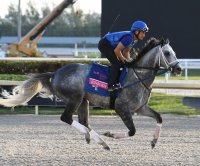 Sports News // 15 hours ago
Knicks Go vs. Life Is Good in Pegasus World Cup highlights weekend horse racing
Jan. 28 (UPI) -- It's only January, but it's possible the "race of the year" could be run Saturday in the $3 million Grade I Pegasus Stakes at Gulfstream Park as speedy Breeders' Cup champions Knicks Go and Life Is Good go head-to-head.