The Celtics ended a two-game skid and, despite an 11-14 record, maintained their lead in the Atlantic Division. New York had won three of its previous five games to account for half its victory total this season.

New York owned a narrow lead for most of the second half until Bradley's 3-pointer gave the Celtics an 86-84 advantage.

A layup by Vitor Faverani and a jumper by Jeff Green gave Boston enough points to win for the seventh time in 11 games.

Jared Sullinger hit 6-of-9 from the field and scored 19 points to lead Boston. Courtney Lee came off the bench to contribute 18 points while Bradley had 16.

Carmelo Anthony, Andrea Bargnani and Amare Stoudemire combined to score all but 20 of New York's points. Anthony had 26, Bargnani scored 22 and Stoudemire had 18. 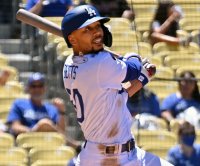 Sports News // 15 hours ago
Kyle Larson extends hot streak, wins NASCAR All-Star Race
June 14 (UPI) -- Kyle Larson pulled his No. 5 Chevrolet across the finish line first for the third-consecutive event at NASCAR's All-Star Race to extend the most dominant run of the 2021 season.