OKLAHOMA CITY, Nov. 29 (UPI) -- Russell Westbrook hit a 3-point shot with a tenth of a second showing on the overtime clock Friday, giving Oklahoma City a 113-112 win over Golden State.

The Thunder won their sixth in a row, a streak that began after losing a dramatic decision to the Warriors.

Serge Ibaka missed a jumper from the foul line with 5.9 seconds to go in the extra period that would have tied the game. Westbrook fought for the rebound and almost lost it out of bounds, but Jeremy Lamb saved it to Westbrook.

Westbrook then dribbled beyond the 3-point line and hit a shot from the corner to give him 34 points for the game.

Stephen Curry led the Warriors with 32 points, 11 rebounds and five assists while Harrison Barnes had 26 points.

Sports News // 4 hours ago
Scabbard favored in Kentucky Derby prep in weekend horse racing
Jan. 17 (UPI) -- Scabbard is the favorite in the weekend's Kentucky Derby prep,; Dubai continues to produce thrilling finishes and Hong Kong's Horse of the Year needs a good run to get to Dubai. 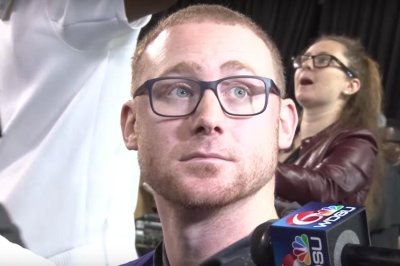