Kudryavtseva edged by eighth-seeded Ajla Tomljanovic 6-1, 3-6, 7-6 (7-2). Tomljanovic won two-thirds of the points on serve but Kudryavtseva was able to finish off three of her seven break chances.

The third break came in the third set and led to the tiebreaker that Kudryavtseva quickly pulled away in.

Dinah Pfizenmaier also advanced after a three-set win, beating Stephanie Dubois 6-7 (7-9), 6-3, 6-4 behind a 10-ace attack. She faced only one break point after the first set.

Kimiko Date-Krumm is the top seed for the tournament, with Yanina Wickmayer seeded second, Zhang Shuai the No. 3 seed and Ayumi Morita fourth. Zhang defeated Morita in Sunday's final of the WTA tournament in Nanjing, China.

Sports News // 2 hours ago
PGA Championship 2022: Rahm, Scheffler favorites for golf's second major
May 18 (UPI) -- Jon Rahm and Scottie Scheffler are co-favorites to win the 2022 PGA Championship, the second major tournament of the PGA Tour season, which runs from Thursday through Sunday in Tulsa, Okla.

NBA // 4 hours ago
Heat 'inspired' by Jimmy Butler's 41 points in Game 1 win vs. Celtics
MIAMI, May 17 (UPI) -- Jimmy Butler poured in 41 points and the Miami Heat offense launched an explosive third-quarter comeback to beat the Boston Celtics 118-107 in Game 1 of the Eastern Conference finals on Tuesday at FTX Arena.

NBA // 20 hours ago
Kyrie Irving says he 'would've won' more titles with Cavs, LeBron; cites maturity
May 17 (UPI) -- Brooklyn Nets guard Kyrie Irving says he would have won more championships with LeBron James and the Cleveland Cavaliers if he had the "same maturity line" and understanding of himself he does now. 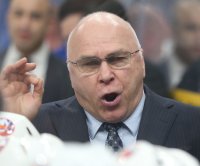