SAN FRANCISCO, Oct. 31 (UPI) -- Peter Senior, who owns the Champions Tour record for most money won without a victory, took the lead Thursday at the Charles Schwab Cup Championship.

Senior has played in 94 tournaments without a win, but in the process has collected $4.2 million.

His 8-under 63 Thursday at the TPC-Harding Park course put him one shot in front after the opening round of the tour's final event of the season.

David Frost had a 64, Fred Couples shot 65 and Mark O'Meara was alone in fourth with a 66.

The yearlong points race will be concluded this week and Kenny Perry heads into the tournament in excellent position to win the Charles Schwab Cup.

Perry leads the points race and the only other player with a chance to finish in front of him is Bernhard Langer.

To win the Charles Schwab Cup, Langer must win this tournament while Perry is finishing outside the top five.

Langer opened with a 67 Thursday to tie for fifth place with Steve Elkington and Duffy Waldorf. Perry was in a six-way tie for eighth after firing a 68.

Senior made nine birdies in his opening round and also eagled the par-5 ninth.

Sports News // 9 hours ago
Kentucky Derby: Prospective field set for 20 Thoroughbreds
April 12 (UPI) -- With all the preliminaries in the book, here's how the field shapes up for the May 1 Kentucky Derby.

MLB // 9 hours ago
Red Sox's J.D. Martinez hits three homers in win vs. Orioles
April 12 (UPI) -- J.D. Martinez started his day with a strikeout, but went on to smack three home runs to lead the Boston Red Sox to a 14-9 victory over the Baltimore Orioles in Baltimore.

Sports News // 9 hours ago
Kentucky Derby field set in weekend racing
April 12 (UPI) -- Another big weekend of Thorougbred racing at Keeneland and Oaklawn Park set the tentative field field for the May 1 Kentucky Derby amid some fascinating battles among the sprinters and turf specialists. 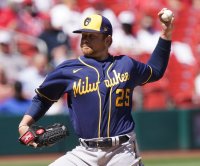