James added eight assists and six rebounds and held Rose to just 12 points while Chris Bosh chipped in with 16 points and six boards for the Heat.

Shane Battier scored eight of his 14 points during a second-quarter surge during which the two-time defending NBA champions outscored Chicago 37-18 to put the contest away.

Battier went 4-of-4 from 3-point range, including a pair of treys in the second quarter run.

Rose, playing in his first NBA game since April 28, 2012 after surgery to repair a torn knee ligament, was held to 4-of-15 from the field in his debut.

Carlos Boozer pumped in 31 points to go with seven rebounds and Jimmy Butler provided 20 points and five steals for Chicago, which lost to the Heat in the Eastern Conference semifinals last season. 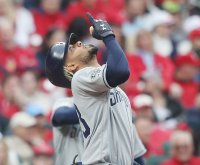