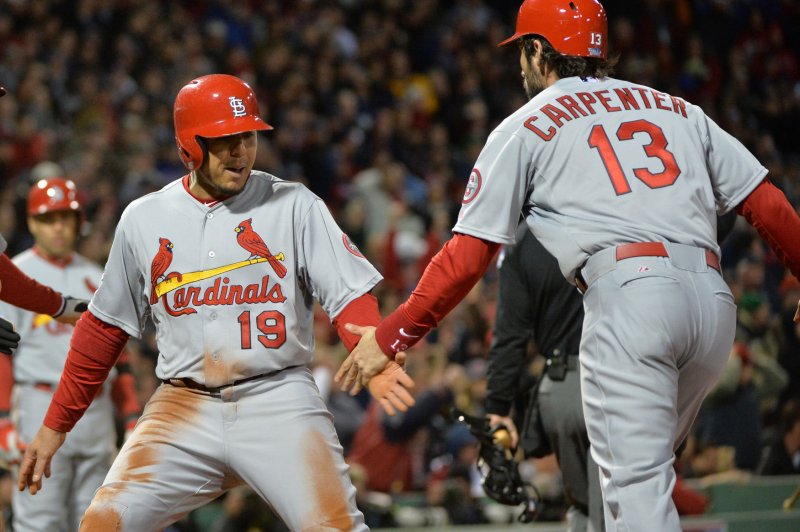 St. Louis Cardinals Jon Jay (19) is congratulated by Matt Carpenter (13), who sacrificed him home, in the seventh inning against the Boston Red Sox in game two of the World Series at Fenway Park in Boston on October 24, 2013. UPI/Kevin Dietsch | License Photo

St. Louis Cardinals Pete Kozma slides into home as the ball gets by Boston Red Sox catcher David Ross after a sacrifice fly by Matt Carpenter in the seventh inning of game two of the World Series at Fenway Park in Boston on October 24, 2013. UPI/Kevin Dietsch | License Photo

BOSTON, Oct. 24 (UPI) -- Matt Carpenter's fly ball in the seventh led to two errors on one play Thursday and St. Louis rallied to even the World Series with a 4-2 victory over Boston.

St. Louis starter Michael Wacha won his fourth decision of the playoffs despite giving up a go-ahead, two-run homer to David Ortiz in the sixth, but the Cardinals bounced back with a big inning of their own to seize home-field advantage in baseball's championship showdown.

With the series tied at 1-1, the teams now head to St. Louis for scheduled games on Saturday, Sunday and Monday. A team would have to win all three to prevent the series from returning to Boston for the final act of the baseball season.

St. Louis, overwhelmed by its own mistakes in an 8-1 loss to begin the series on Wednesday, took the lead in the fourth on a leadoff triple by Matt Holliday and a run-scoring ground out on a high bouncing ball over the head of pitcher John Lackey by Yadier Molina.

Wacha protected the lead until the sixth when Dustin Pedroia drew a one-out walk and Ortiz hit a 3-2 pitch off the end of the bat that just carried over Fenway Park's Green Monster wall in left field.

Wacha came into the game having allowed just one run on eight hits in 21 innings of playoff baseball after starting just nine regular-season games in this, his rookie campaign.

The critical St. Louis seventh inning began with Allen Craig striking out, but Lackey then walked David Freese and Jon Jay followed with a single.

Craig Breslow relieved Lackey and Pete Kozma also entered the game as a pinch-runner for Freese. Daniel Descaslo was next at the plate and on a 2-2 count Kozma and Jay executed a successful double steal. Descaslo eventually drew a walk to load the bases.

Carpenter followed by hitting Breslow's first pitch in the air to left fielder Jonny Gomes and Kozma, whose two errors in the series opener helped put St. Louis in an early hole, dashed home on the sacrifice fly to tie the game.

Gomes tried to get Kozma at the plate, but his throw scooted past catcher Jarrod Saltalamacchia for an error. Jay sped from second to third on the fielding miscue and Breslow, fielding the ball after backing up home plate, attempted to throw him out.

Breslow's throw, however, sailed down the left field line for another error and that allowed Jay to score. Carlos Beltran, playing despite sore ribs picked up in a collision with the right-field wall on Wednesday, singled in Decaslo with an insurance run.

Carlos Martinez protected the lead by working two innings in relief of the 22-year-old Wacha and worked his way around an error by Carpenter at second base in the eighth. Trevor Rosenthal struck out the side in the ninth for the save.

The three St. Louis pitchers combined for 12 strikeouts and limited the Red Sox to four hits.