The Maple Leafs fell behind twice in the third period, but James van Riemsdyk and Joffrey Lupul each scored an equalizing goal.

Lupul's -- his second tally of the contest -- came with only 31 seconds left after Toronto had pulled its goaltender to add a sixth attacker.

Then in overtime, the Oilers turned the puck over in the neutral zone and the Leafs came in on a 3-on-1 break. Cody Franson's initial shot was turned aside by Devan Dubnyk, but Bolland put home the rebound for the game-winner.

Van Riemsdyk also scored twice, while Nazem Kadri added a goal and an assist for Toronto, which is off to a 5-1-0 start.

Jonathan Bernier stopped 26-of-31 shots for the Leafs.

Ryan Smyth netted two goals and Jordan Eberle chipped in a goal and an assist for Edmonton.

Sports News // 16 hours ago
For Novak Djokovic, French Open, U.S. Open in doubt due to being unvaccinated
Jan. 18 (UPI) -- Tennis great Novak Djokovic's quest for a record 21st Grand Slam title could be delayed further because of government officials' concerns that he has not been vaccinated for COVID-19, 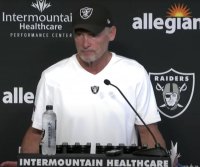 Sports News // 21 hours ago
Australian Open tennis: Tsitsipas, Sabalenka advance, top Americans ousted
Jan. 18 (UPI) -- Stefanos Tsitsipas and Aryna Sabalenka were among the top-seeded players to win Tuesday at the Australian Open. Sofia Kenin and Coco Gauff, the top Americans in the tournament, each were eliminated in the first round.

NFL // 23 hours ago
Matthew Stafford, Rams crush Cardinals, advance to divisional round
Jan. 18 (UPI) -- Veteran quarterback Matthew Stafford earned his first career playoff win, throwing for two scores and running for another in a dominant Los Angeles Rams victory over the Arizona Cardinals in the 2022 NFL wild-card round.
Advertisement