MINNEAPOLIS, Sept. 13 (UPI) -- Chris Archer combined with three relievers on a five-hit shutout Friday that lifted Tampa Bay to a 3-0 win over Minnesota.

The Rays stayed out front in the race for the American League's second wild card spot. They own a 1 1/2-game advantage over both Cleveland and Baltimore and a two-game lead over the New York Yankees.

Archer (9-7) struck out seven and gave up three hits without a walk in six innings.

Jake McGee, Joel Peralta and Fernando Rodney each worked an inning of relief with Rodney turning in a perfect ninth for his 35th save.

Desmond Jennings put the Rays in front with an RBI single in the second, a base hit by James Loney brought home another run in the third and Tampa Bay tacked on a score in the seventh when Yunel Escobar doubled home Jose Molina.

Kevin Correia (9-12) gave up all three runs on eight hits in six-plus innings to absorb the loss.

Soccer // 12 hours ago
Alex Morgan 'devastated' by U.S. soccer loss, Alyssa Naeher out for bronze medal game
Aug. 3 (UPI) -- U.S. women's soccer star Alex Morgan noted her frustration about the team's semifinal loss Tuesday on social media, but was one of several American players to say her goal is to bring home a bronze medal. 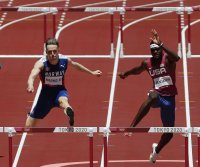