BALTIMORE, Aug. 16 (UPI) -- Wilin Rosario gave Colorado the lead in the seventh with one of four homers Friday that gave the Rockies a 6-3 victory over Baltimore.

The Orioles lost their fourth in a row after letting an early two-run lead slip away.

Nolan Arenado began the Colorado comeback with an RBI single in the fifth and Charlie Culberson tied it with the first home run of his major league career in the sixth. Culberson's blast came in his 54th at-bat spread over two seasons with San Francisco and the Rockies.

Rosario snapped a 2-2 tie with a two-run homer in the seventh, Charlie Blackmon tacked on another Colorado home run in the eighth and Todd Helton hit yet another in the ninth.

The rally made a winner out of Juan Nicasio (7-6), who gave up the two runs on four hits in six innings. 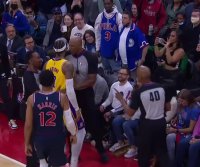 Sports News // 16 hours ago
Watch: Medvedev calls official 'small cat' in rant at Australian Open
Jan. 28 (UPI) -- Daniil Medvedev advanced to the Australian Open final Friday in Melbourne, despite an on-court rant directed at the chair umpire in the second set of the semifinal victory.

Sports News // 16 hours ago
Knicks Go vs. Life Is Good in Pegasus World Cup highlights weekend horse racing
Jan. 28 (UPI) -- It's only January, but it's possible the "race of the year" could be run Saturday in the $3 million Grade I Pegasus Stakes at Gulfstream Park as speedy Breeders' Cup champions Knicks Go and Life Is Good go head-to-head.