Fraser-Pryce won by a wide margin of 0.22 seconds over Murielle Ahoure of the Ivory Coast with U.S. runner Carmelita Jeter third at 10.94.

It was the second World Championship for Fraser-Pryce, who won the 100 in 2009 but missed the 2011 edition because of a suspension for testing positive for a banned substance. She won the event in the Olympics in 2008 and 2012.

British runner Christine Ohuruogu reclaimed the women's 400 title she won in 2007, edging Botswana's Amantle Montsho, who was given the same finishing time of 49.41 seconds. Russian favorite Antonina Krivoshapka was the bronze medalist, finishing in 49.78.

David Oliver claimed the third gold medal for the United States when he won the 110-merter hurdles in 13.00 seconds with fellow American Ryan Wilson second at 13.13. Russian runner Sergey Shubenkov (13.24) finished just ahead of Jason Richardson (13.27) and prevented an American sweep of the event.

Valerie Adams, from New Zealand, added a world title to her Olympic gold in the women's shot put, reaching 20.88 meters (68.5 feet) on her third throw. Germany's Christina Schwanitz was second at 20.41 and the bronze medal went to China's Gong Lijiao with a heave of 19.95.

Pawel Fajdek, from Poland, claimed his first world championship with a hammer throw of 81.97 meters (268.93 feet). That is the best this year in the event. Krisztian Pars, the gold medal winner at the London Olympics, won the silver medal for Hungary, reaching 80.30 meters while Czech athlete Lukas Melich was third at 79.36.

MLB // 12 hours ago
Reds fan accidentally catches baseball in beer cup, chugs for crowd
May 24 (UPI) -- A Cincinnati Reds fan attempted to catch a foul ball during the team's loss to the Chicago Cubs, but his beer did most of the work, as the souvenir landed in the cup placed directly in front of him. 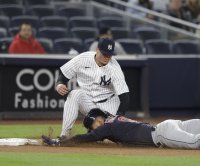