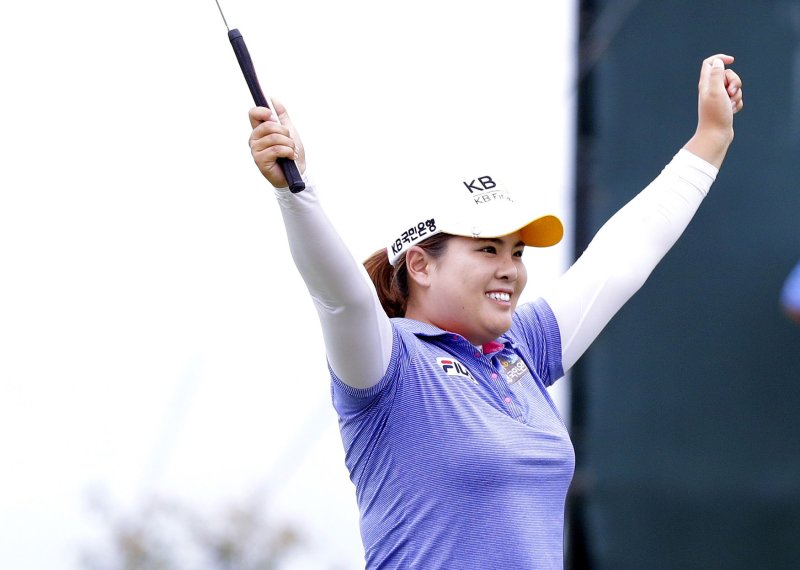 Inbee Park reacts on the 18th green after winning the 2013 Women's U.S. Open at Sebonack Golf Club in Southampton, New York on June 30, 2013. Park wins with a score of 8 under par and wins her 3rd consecutive LPGA major championship. UPI/John Angelillo | License Photo

Lewis was a two-stroke winner over Choi Na-yeon and Park Hee-young for her second major title (2011 Kraft Nabisco Championship) and that keeps her in the No. 2 spot in the world women's golf ranking.

Choi remains fourth in the rankings while Park moves up six places to 15th. Suzann Pettersen, the only other Top 10 player to finish in the upper tier last week at St. Andrews, is still third.

Shin was the defending Women's British Open champion but tied for 36th this year and slips from eighth to 10th in the rankings. Catriona Matthew, who tied for 11th Sunday, goes from 10th to eighth.

No. 1-ranked Inbee Park was seeking a fourth major tournament title of this year but wound up tied for 42nd after a final round of 6-over 78. She'll have another shot at a fourth major -- women's golf has five major tournaments -- in September at the Evian Championship in France. No player has won more than three in a calendar year.

NHL // 26 minutes ago
McDavid's OT winner guides Oilers by Flames for Stanley Cup semis spot
May 27 (UPI) -- Connor McDavid whipped a wrist shot by Jacob Markstrom 5:03 into overtime to lead the Edmonton Oilers past the Calgary Flames in Game 5 of their second-round playoff series and into the Western Conference finals.

MLB // 3 hours ago
Yankees, Rays use social media to share U.S. gun violence stats during game
May 27 (UPI) -- The New York Yankees and the Tampa Bay Rays collaborated during their game Thursday night to use their social media accounts to raise awareness about gun violence in the United States.