TORONTO, June 23 (UPI) -- Edwin Encarnacion went 3-for-5 with a homer and four RBI Sunday, leading the charge for Toronto in its 13-5 rout of Baltimore for an 11th straight win.

Encarnacion's two-run blast in the second inning handed the Blue Jays a 4-0 lead and his two-run double in the next frame capped a five-run outburst that broke the contest open.

J.P. Arencibia went 3-for-4 with a run batted in while Maicer Izturis and Emilio Bonifacio each provided two hits and an RBI for the red-hot Blue Jays, who completed a three-game sweep of the Orioles and moved two games above .500 (38-36).

Josh Johnson (1-2) earned his first win of the season, yielding four runs on seven hits over six innings. He walked one and struck out five.

Ryan Flaherty pounded a pair of homers in Baltimore's loss. 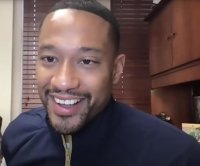