Toronto was playing with 10 men after Doneil Henry was sent off in the 41st minute with his second yellow card, but midfielder Jonathan Osorio still managed to put Toronto ahead in the 66th with a diving header.

Philadelphia, however, responded in the closing moments when McInerney's low shot in the 90th minute went in for the equalizer.

Toronto (1-7-5), meanwhile, let a victory slip away en route to extending its winless streak to 12 games. 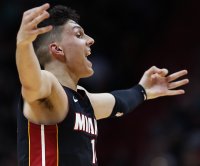 Sports News // 7 hours ago
Justin Thomas lauds golf team for PGA Championship win, expects Pereira rebound
May 23 (UPI) -- Justin Thomas used all resources available for his historic rally at the 2022 PGA Championship, including his golf pro father, his un-retired caddie and motivation from friend Tiger Woods for what he called a "team win."

Sports News // 13 hours ago
Triple Crown becomes tale of rest rather than racing
May 23 (UPI) -- With horses dropping in and out of the competition from race-to-race, this year's Triple Crown series seems to emphasize rest over actual racing and the "trail" has turned into a maze.

Sports News // 23 hours ago
Golf: Thomas edges Zalatoris in playoff for PGA Championship title
May 22 (UPI) -- Justin Thomas beat Will Zalatoris by one stroke in a three-hole playoff to claim his second career major title at the 2022 PGA Championship on Sunday at Southern Hills Country Club in Tulsa, Okla.