LOS ANGELES, May 1 (UPI) -- Hyun-Jin Ryu struck out a dozen batters in six innings while leading the Los Angeles Dodgers to a 6-2 win over the visiting Colorado Rockies Tuesday.

Ryu (3-1) allowed two runs on three hits and also drove in a run for the Dodgers, who bounced back from a 10-run loss to the Rockies Monday and won for the fourth time in their last six contests.

Hanley Ramirez made his first start since coming off the DL Monday and went 2-for-4 with a home run. Adrian Gonzalez, Matt Kemp, Nick Punto and Jerry Hairston Jr. each drove in a run for the Dodgers.

Carlos Gonzalez homered and Michael Cuddyer drove in Colorado's other run with a double. Jorge De La Rosa (2-3) took the loss after giving up six runs on 11 hits in four innings.

Los Angeles outhit the Rockies 13-5 and led 6-1 after three innings. 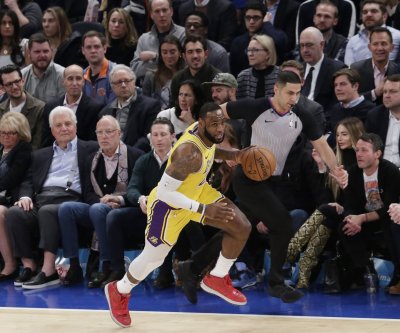