Aphibarnrat had four birdies on each side against one bogey in earning a one-stroke lead over four other players.

In that group at 6-under is Scott Jamieson, who completed 10 holes before play was suspended due to rain.

About half the field of 154 players will have to complete their first rounds before the second round can begin Friday. Some players got only four holes in Thursday before play was suspended.

Jamison opened with a bogey but had five birdies before making the turn and had an eagle at the par-5 10th hole before he was called off the course. Also at 6-under, but with their first rounds complete, are Gregory Bourdy, Anders Hansen and Edoardo Molinari.

Aphibarnrat started play Thursday on the second nine of the Kuala Lumpur Golf and Country Club course with a birdie but was back to even after a 12th-hole bogey. He posted back-to-back birdies at Nos. 14 and 15 before adding another at 17.

He climbed into the lead with three straight birdies at holes 3-5 and closed his day with a ninth-hole birdie.

Oosthuizen wins in Malaysia by 3 strokes

NFL // 8 hours ago
Vikings' Thielen, Ravens' Humphrey, Raiders' Drake among injured in NFL's Week 13
Dec. 6 (UPI) -- Adam Thielen of the Minnesota Vikings, Marlon Humphrey of the Baltimore Ravens and Kenyan Drake of the Las Vegas Raiders are among the top players who sustained significant injuries in Week 13 of the 2021 NFL season. 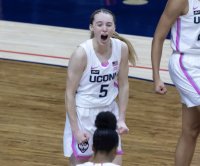 NFL // 11 hours ago
Chiefs defense sparks win over Broncos
Dec. 6 (UPI) -- The Kansas City Chiefs defense forced three turnovers, including an interception returned for a touchdown, to spark a 22-9 win over the Denver Broncos. The win helped the Chiefs hang on to first place in the AFC West.