BOSTON, March 5 (UPI) -- A private group in Boston has begun organizing an effort to bring the 2024 Summer Olympics to the city, it said.

The Boston Olympic Exploratory Committee hopes to win the endorsement of Mayor Thomas M. Merino of its cause, and committee chairman Eric Reddy said conversations Monday with public officials were promising.

Two weeks ago the U.S. Olympic Committee solicited bids from 35 cities, including Boston, to find an American candidate for the games, and the positive report from the Monday meetings suggests the city may give the idea serious consideration, The Boston Globe reported Tuesday.

Reddy said his group seeks "a green light to pursue this for, say, five months, and see how far we get." He stressed the group was "trying to be quiet about this," choosing not to over-promote an effort in its early stages.

The U.S. Olympic Committee, in its letter, noted the 2024 host city must be prepared with a reliable transit system and accommodations for 16,500 athletes and 15,000 media members, as well as 45,000 hotel rooms.

The newspaper pointed out Greater Boston has only 30,000 hotel rooms and a cash-strapped subway system with some cars more than 40 years old.

Speaking in generalities, Idzik told a caller, "Tim, as you know, (is) currently on our roster and what we're trying to do is increase competition at that position. ... We're going to see who we're able to bring on board and let it play out."

Idzik either emphasized Tebow's safety in being on the roster, or pointed out everyone is fighting for a job on the team, USA Today noted Tuesday, adding Mark Sanchez, Greg McElroy and possibly veteran David Garrard will join Tebow as prospective quarterbacks when the Jets begin training camp in July.

Lombardi to be Browns' general manager

Lombardi was named the Browns' vice president-player personnel in January.

Lombardi, no relation to NFL coaching legend Vince Lombardi, has been an executive for five other NFL teams before joining the Browns. Most recently he was senior personnel executive from 1998 to 2007 for the Oakland Raiders.

The Browns said Tuesday Farmer's duties include helping Lombardi manage the professional and college scouting departments. Farmer was the director of pro personnel for the Kansas City Chiefs (2006-12).

NEW YORK, March 5 (UPI) -- Heisman Trophy winners Eric Crouch, Ron Dayne, Vinny Testaverde and Danny Wuerffel are among the 77 players on the ballot for the College Football Hall of Fame.

In addition to the more than six dozen players, five coaches are on this year's ballot. The coaches include Bill McCartney, who coached Colorado from 1982-94, helping the Buffaloes to three Big Eight championships.

Testaverde played for Miami (Fla.) and won the Heisman Trophy in 1986 and Wuerffel won while at Florida in 1996. Dayne won the award at Wisconsin in 1999 and Crouch, from Nebraska, was the 2001 winner.

Other notable players on the ballot are Eric Dickerson, who became a record-setting NFL running back and Kirk Gibson, who had a 16-season major-league baseball career and is the current manager of the Arizona Diamondbacks.

The 2013 induction class is to be announced May 7. Induction ceremonies are scheduled for Dec. 10 in New York.

NHL // 16 hours ago
New York Islanders postpone games after players test positive for COVID-19
Nov. 27 (UPI) -- An outbreak of COVID-19 on the New York Islanders has caused the hockey team to postpone its games through at least Tuesday, the National Hockey League announced Saturday. 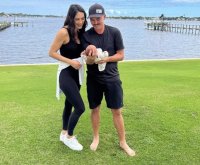 Soccer // 2 days ago
MLS Cup Playoffs: Timbers upset top-seeded Rapids
Nov. 26 (UPI) -- Defender Larrys Mabiala cleaned up a loose ball in the box with a shot into the upper corner for a 90th-minute score, leading the Portland Timbers to an upset of the top-seeded Colorado Rapids in the MLS Cup Playoffs.
Advertisement