CALGARY, Alberta, Feb. 3 (UPI) -- Ray Emery turned aside 45-of-47 shots and made three saves in a shootout Saturday, backstopping the Chicago Blackhawks to a 3-2 win over Calgary.

The Flames grabbed a 2-1 lead with 35 seconds left in the third period when Jay Bouwmeester dented Emery for a goal off a pass from Jiri Hudler.

But Marian Hossa batted a loose puck past Miikka Kiprusoff on a scramble in front of the net with only 2.1 seconds left in regulation.

After an overtime in which he made three saves, Emery stopped Alex Tanguay, Hudler and Roman Cervenka in the shootout while Patrick Kane scored as Chicago improved to 7-0-2 on the season.

Kane also scored in regulation for the Hawks.

Dennis Wideman scored and Kiprusoff ended with 17 stops for Calgary.

NBA // 2 hours ago
Heat's Bam Adebayo sinks buzzer beater vs. Nets
April 19 (UPI) -- All-Star forward/center Bam Adebayo took his defender off the dribble, bullied his way into the paint and drained a jump shot at the buzzer to lead the Miami Heat to a 109-107 victory over the Brooklyn Nets in Miami. 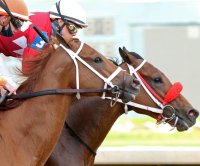 Sports News // 3 hours ago
Baffert-trained Concert Tour, two others drop out of Kentucky Derby
April 19 (UPI) -- Million-dollar races at Oaklawn Park produced a big upset and a potential star for the remainder of the year in highlights of horse racing this weekend.

NFL // 13 hours ago
Trevor Lawrence, Jaguars' likely No. 1 pick, donating $20K to Jacksonville charities
April 18 (UPI) -- Former Clemson Tigers quarterback Trevor Lawrence, who is expected to be the Jaguars' pick at the top of this month's NFL Draft, and his wife, Marissa, plan to donate $20,000 to charities in Jacksonville.

MLB // 14 hours ago
Monday's Twins-Athletics game postponed due to COVID-19 issues
April 18 (UPI) -- MLB has postponed Monday's game between the Minnesota Twins and Oakland Athletics at Oakland Coliseum to allow the Twins organization to conduct testing and contact tracing for COVID-19.