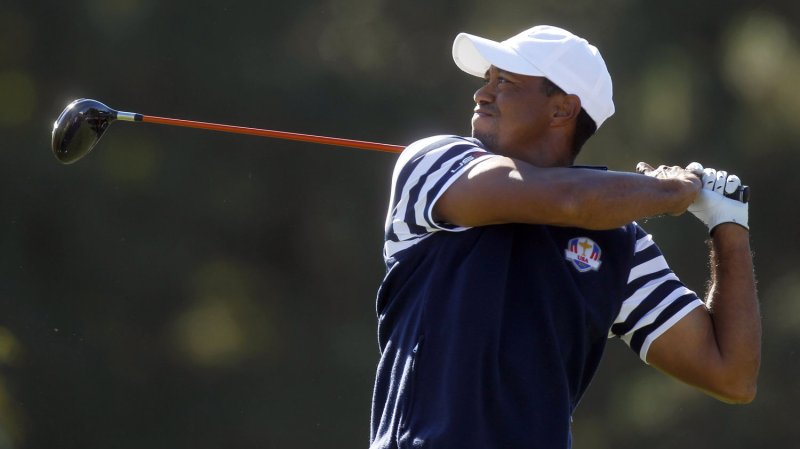 Team USA's Tiger Woods tees off on the ninth hole at the 39th Ryder Cup at Medinah Country Club on September 29, 2012 in Medinah, Illinois. Europe came from behind to win the Cup 14 1/2 to 13 1/2. UPI/Mark Cowan | License Photo

Davis Love said it in his interview: "We've got unbelievably fast thoroughbreds here."

Much like Secretariat in the Belmont, when thoroughbreds want to run, there is no stopping them.  There is something about the Ryder Cup that makes them perform.

Confidence in oneself is one of the keys to success. The Ryder Cup players exude confidence. They have all won something big in order to make it on the team. They already know that they are good, but playing in the Ryder Cup adds to that confidence. There is something special about being selected for a Ryder Cup team that adds to one's sense of self-worth. Every player in the Ryder Cup has a renewed sense of accomplishment when they're chosen for a team.

Being part of the Ryder Cup is like having a booster shot of confidence. This sense of confidence last long after the Ryder Cup, even if the player doesn't play well during the tournament. You will see Ryder Cuppers play their best golf of their careers just after competing in the Cup.

One of the fundamental principles of peak performance is that of urgency. The Ryder Cup creates a "must make" feeling from the very first shot of the very first day.

All tournaments, especially the majors, have "must make" moments in them, but they occur sporadically throughout a round. A regular 72-hole stroke play event is more a game of patience than it is matter of urgency. Patience is not going to get you far in your match at the Ryder Cup. You have to make your move fast and keep it moving because that is exactly what your opponent is planning to do.

There is a lot of pressure during the Ryder Cup, but this kind of pressure can actually be liberating for these thoroughbreds. But with as much pressure as there is in the Ryder Cup, there's also "nothing to lose" feeling about it that makes the players have to go for it.

Being part of a team also changes the dynamic of the pressure situations. Players can feed off each other. It's not just "me against the world." Instead, Ryder Cup participants play with people they usually play against.

Every shot in the Ryder Cup can be a make or break, so players live in the present. Living in the present is a liberating experience and is the key to experiencing the Zone. In the Zone, players see what is possible and don't see why things might not be possible. They are not victims of doubt as to whether or not they can make a shot, but they are rather in a state of supreme confidence where not only is the shot possible but that it must be done. It is a sense of calling that is motivation of shots and not a conscious decision. There is a sense of nothing left to lose that pervades at the Ryder Cup.

Over 72 holes of stroke play, a player might start to lose focus as they try their best to plot through four rounds and execute a well developed game plan.  That is why the majors are so difficult to win -- you're playing out a plan over four days. In the Ryder Cup, a player establishes a game plan for each hole, but the round turns quickly into improvisation as amazing shots are performed by teammates and opponents.

Einstein said that genius is one percent inspiration and 99 percent perspiration.

The key to this formula is that genius would not occur if that one percent of inspiration was never present. Each moment in the Ryder Cup becomes a potential moment of genius. We have the best players in the world who are ultra-prepared to compete. It only takes a small drop of inspiration for the genius in each and every one of them to come out.

This inspiration occurs for one very important reason and is perhaps the main reason that the Ryder Cup creates such extraordinary golf. The Ryder Cup's special format takes a golfer out of his normal way of functioning.

Champion golfers find ways to tap into the reaction mode while playing, but this is not always an easy task. At the Ryder Cup, they are actually forced to function through reaction. Right from the start of the tournament, the atmosphere is electric, urgency is in the air and the players are being let lose to run. During the Ryder Cup, they are in a constant state of reaction.

As we saw, the players in the Ryder Cup are ready to run. On every shot, the players on both teams were like thoroughbreds in the starting gates waiting for the signal. Once sounded and the gates open, they took off and never stopped until it was over.

NFL // 55 minutes ago
Steelers overcome Colts rally, earn fourth win
Nov. 29 (UPI) -- The Pittsburgh Steelers jumped out to an early lead, overcame a late rally and took the final edge on a Benny Snell touchdown with 10 minutes remaining to beat the Indianapolis Colts in the NFL's Week 12 finale.

Soccer // 4 hours ago
World Cup soccer: USA 'embraces' pressure of must-win match vs. Iran
Nov. 29 (UPI) -- The United States Men's National Team is "embracing" the pressure ahead of its must-win match against Iran at the 2022 World Cup. The Americans and Iranians will meet in the Group B finale Tuesday in Doha, Qatar.

Soccer // 18 hours ago
World Cup soccer: Casemiro, Brazil beat Switzerland, advance to Round of 16
Nov. 28 (UPI) -- Star midfielder Casemiro ripped a half-volley screamer into the right-side netting in the 83rd minute to beat Switzerland and clinch Brazil's spot in the Round of 16 at the 2022 World Cup on Monday in Doha, Qatar.