The making of a Ryder Cup team 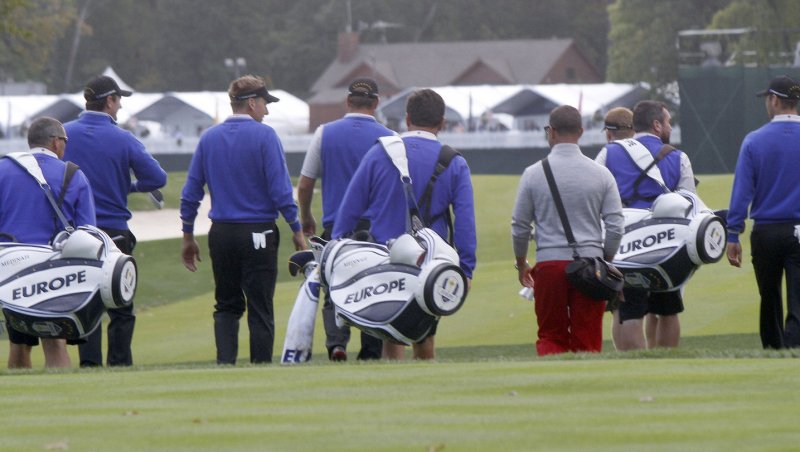 Golf is an individual sport. This fundamental nature of the game always makes playing golf in a team setting challenging. Much like tennis, however, playing in doubles is also an inherent part of the game. For some reason, the doubles formula that is still commonly played in tennis has, for the most part, been lost in golf. Like in tennis, it is actually a great way to enjoy a round with a friend or spouse. We should definitely practice this more often, especially in the private clubs where people aren’t paying for the green fees. One thing that it would serve is to teach people to play faster.

The Making of a Team

Even playing doubles matches, however, is nothing like playing with a team in the Ryder Cup. Ryder Cup teams are arbitrary, so team spirit must be created and nurtured.

What always surprised me during the lean years of American dominance in the Ryder Cup is that all the talk was how the Americans didn’t play well in the team matches. After all, American players are exposed to more golf in a team setting than are the Europeans. American tour players benefit from experience with team play in our university system.

RELATED A guide to watching practice rounds: what are the pros doing?

The team concept is quite easy to build and maintain in the university setting. All one must do to spark the team spirit in an American is mention the name of any mascot and our Pavlovian instincts take over. This, of course, explains the foaming of the mouth that can be witnessed in most American households every Saturday and Sunday afternoon.

Even in our universities, this team spirit still does not break through to the inner core of the golfer. Golf is simply not a team sport. I encourage all of my junior students to play at least one team sport. Not to help prepare them for the Ryder Cup, but simply because some of life’s lessons cannot be learned through such an individual activity like golf.

A Group of Rock Stars

The only way to have a team in golf is to find a common denominator of all the individual stars that are present. To understand the Ryder Cup, we must understand that professional golfers are much more like rock stars than they are athletes. Take, for example, all the mini-tours around the world -- they are like bars and clubs for budding rock stars to gain experience. Golfers start to get the good gigs (PGA and European Tours) and make real money only when they are good enough to play in front of thousands of people.

In this sense, the Ryder Cup (and really all tour events) is like a big music festival with guitar duels reminiscent of a scene from Crossroads. One could imagine Jimi Hendrix battling Eric Clapton and Stevie Ray Vaughn battling Jeff Beck. In fact, the origins of the Ryder Cup are very much similar to that of most music festivals. A few people came up with the idea of “wouldn’t it be nice to see…” and this idea appealed to the right people who managed to get it organized. It just happened to be a great idea, so it has developed into what it is today.

Role of the Captain

The success of the Ryder Cup in the 20th century was helped by two conditions: 1) the fact that golf was not an Olympic sport, allowing players to tap into unused patriotism, 2) the fact that an ocean separated the Cup champions across two continents.

There has been much talk in the press room this week about how the European players and the American players are all now well-acquainted, or occasionally friends with one another, because they play so many tournaments together.

Players have been questioned as to how this will influence play. I have even noticed many journalists actively searching to create drama by asking provocative questions about ad hoc comments that a couple of players have made. I have sensed while listening to interviews a need to create some of the old “War by the Shore” drama that was so present when Seve and Azinger were playing.

The answer from the players has been pretty unanimous: they are playing for the trophy and for our captains. I call this the "Seve Effect," where the team captain has become instrumental to the success of his team. Seve is the person who created the modern Ryder Cup. It was his passion for the sport and his work building the European Tour that has created such drama in the past couple of decades tournament.

The role of captain has become tremendously important. The role of the captain before was not the same as it is now. Being a captain was easy in the past. Davis and Jose now have a tremendous amount of pressure on them.

In today’s Ryder Cup, the captain has the job of creating a team out of a group of rock stars and this is no easy task. Too many stars in one group can often create a conflict of egos. A good captain needs to know how to blend people together with a common cause. Jose’s deeply personal tribute to Seve showed how important the man was to him. Seve has become somewhat of a spiritual co-captain.

It is no surprise that Davis has called upon some of his close friends and star figures like Fred Couples, to help him. He also has the help of Chicago resident Michael Jordon, who has been spending time with the team.

I think that that both captains have fulfilled their roles well. With the greatest players in the world playing the best golf we have seen in a very long time, it promises to be a very exciting week at the 39th Ryder Cup.

Olazabal: Medinah set up for birdie-fest Giant golf ball stolen from roadside Commentary: Why Is The Ryder Cup So Special?

NBA // 13 hours ago
LeBron James likely to set NBA scoring record vs. Thunder or Bucks
Feb. 2 (UPI) -- LeBron James, who is 89 points away from passing Kareem Abdul-Jabbar to become the NBA's all-time leading scorer, should reach that mark within his next four games, according to his statistical averages and oddsmakers.

NFL // 16 hours ago
49ers 'content' with QBs Purdy, Lance; won't re-sign Garoppolo, coach says
Feb. 2 (UPI) -- The San Francisco 49ers are "content" with Brock Purdy and Trey Lance as the top quarterbacks on their roster and will not bring back Jimmy Garoppolo next season, coach Kyle Shanahan told reporters.