A guide to watching practice rounds: what are the pros doing? 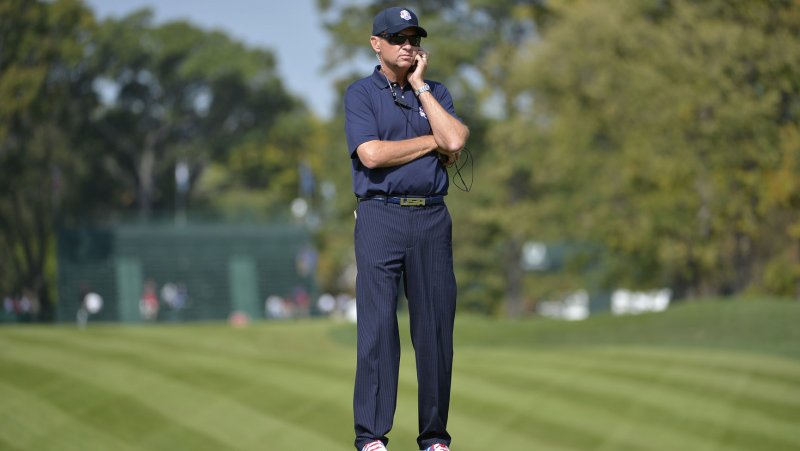 There is actually so much that a player does during a practice round that a complete description could make for a very good book.

Whereas every player has his own routine for practice rounds, there are a few things that all players are looking to achieve.

Get to Know the Course

In his interview yesterday, Tiger Woods said that "the most important thing about these next two days is just getting to know this new course for us."

While playing a practice round, players keep their eyes and ears open to the course like antennas, trying absorb as much information as possible. Players actually gather information on the grounds from their feet as they walk the course.

Playing proper practice rounds can be demanding. This is why they will often play only nine holes in one day. Yesterday, for example, several of the American players played only about 8-10 holes.

You will also notice that they will almost never play for score. Playing for score takes an entirely different mindset. One might say that the antennas are closed to reception, except for information that might influence the shot that is to be played in the moment.

This can change, however, on courses that are regular tour stops. Once a player has been to the same course for a few years in a row, the practice rounds change slightly in nature. Some players are known to even play for a little cash during practice rounds.

Advertisement
RELATED Commentary: Why Is The Ryder Cup So Special?

Medinah is not a regular tour stop and even when a player thinks he knows the course, things can change.

Woods, who has won two PGAs at Medinah, spoke to this dynamic.

"I've been here two PGAs and it's a different golf course again. I'm going to need to do my homework so that whoever I go out with that I will be ready and able to contribute and understand this golf course and how to play it," Woods said.

Get to Know Distances

One of the main focuses during a practice round is to get to know distances to the course's various obstacles -- water hazards, trees, bunkers. One of the things that I noticed yesterday was that, with the exception of hole 15, Medinah's water hazards are all frontal -- in front of the green in the axis of play. For a tour player, these hazards virtually never come into play. However, they will influence shot selection and strategy for the approach shots into those greens.

Nowadays on tour, each player is given a very sophisticated yardage book that has distances to and from nearly every spot imaginable. Yet nothing can be left to chance in a game where one shot could mean the differences between winning or losing the golden Ryder Cup.

This yardage book becomes a veritable notebook for tour players. Players will write down dominant wind direction for each hole in case the wind swirls on different parts of the course because of trees. For example, at Medinah, three of the par-threes play across a major water hazard -- those tend to be pretty windy.

Because the tee boxes and the greens on these holes are sheltered by tall trees, players might not feel the wind and the flag might not be moving much. The player who "hasn't done his homework" as Tiger says, might make a crucial error when the pressure is on.

The other thing that I noticed on the course was that there are a lot of dog-legs out there. As we all know, dog-legs offer an interesting challenge. If you are a slicer, you already know the challenge you are faced when you come to a hole that turns to the left. Believe it or not, tour players are in the same boat. In fact, it is often said that even a play like Lee Trevino never won at Augusta because most of the holes turned to the left and he preferred playing a fade. In the case of Lee at Augusta, there is surely more to it, but there is much truth in that statement.

For a tour professional, the decision is to try to cut the corner (Bubba Watson style), bend it around the corner (Phil Mickelson style) or play to a certain distance in the dogleg that allows for a good angle on the next shot (Zach Johnson style).

With seven holes bending to the left and three turning to the right, strategy off the tee this week is going to be very important. Not only will each player have to decide how to play each hole in preparation for his singles match, the captains are going to have to keep in mind each players' shot tendencies when doing the pairings for the doubles matches.

Get Confident on the Greens

In his interview yesterday, he made a comment that is often said about the modern tour: "ultimately if you look at any golf tournament, whoever makes the most putts usually wins." Whereas I don't think that this is always the case, especially not in the big events, there is no question that one of the main focuses for the players during a practice round is the greens. Very often in golf, for amateurs and pros alike, one's success on the greens comes down to feeling comfortable about the greens. Phil made a comment during the FedEx that even though he has a practice green with the same grass as did the course, he still wasn't comfortable with the greens.

As I was walking the course late in the afternoon, a couple of American team players were back out on the 13th green. There is one spot on the back left of that green where there is a little ridge from the front of the green to the back of the green. Once the ball gets over that ridge, it then goes back downhill and to the left. Hopefully, it's the American's dedication to doing their homework that will help bring the Cup back to the States.

Soccer // 32 minutes ago
Alex Morgan 'devastated' by U.S. soccer loss, Alyssa Naeher out for bronze medal game
Aug. 3 (UPI) -- U.S. women's soccer star Alex Morgan noted her frustration about the team's semifinal loss Tuesday on social media, but was one of several American players to say her goal is to bring home a bronze medal.

Sports News // 5 hours ago
U.S. men's basketball team advances to semifinals with win over Spain
Aug. 3 (UPI) -- Team USA has advanced to the semifinals in men's Olympic basketball with a strong win against Spain on Tuesday.

NFL // 10 hours ago
Eagles rookie WR DeVonta Smith to miss 2-3 weeks due to MCL sprain
Aug. 2 (UPI) -- Philadelphia Eagles rookie wide receiver DeVonta Smith is expected to be out two to three weeks because of a sprained MCL.
Advertisement