Daly told NHL.com the league is determined to avoid any disruption to the scheduled Oct. 11 start of the regular season.

"We're 100 percent focused on not missing any regular-season games and hopefully we can achieve that objective," Daly told NHL.com from Toronto. "Obviously, we've got to talk before you can get a deal, so I think it's important to get the talks going again."

Daly said no formal collective bargaining agreement talks have been scheduled, but added the two sides have remained in contact.

He said the onus was on the players to budge from their initial proposal, which included no absolute decrease in the percentage of league revenues they're currently receiving.

"I think it's fair to say we feel like we need to hear from the Players' Association in a meaningful way because I don't think that they've really moved off their initial proposal, which was made more than a month ago now," he said.

NFL // 10 hours ago
Bill Belichick: Tom Brady's move to Buccaneers wasn't about 'not wanting him'
Sept. 27 (UPI) -- Bill Belichick wanted Tom Brady to stay with the New England Patriots instead of leaving for the Tampa Bay Buccaneers two seasons ago, the quarterback's former coach said Monday. 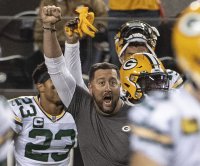