PHILADELPHIA, Aug. 23 (UPI) -- John Mayberry singled home Chase Utley from third with one out in the 11th inning Thursday, giving the Philadelphia Phillies a 4-3 victory over Cincinnati.

The Phillies rallied from a three-run deficit and tied the score in the eighth inning on a sacrifice fly by Jimmy Rollins.

The teams split a four-game series.

Kevin Frandsen reached to open the Philadelphia 11th with a single off Alfredo Simon (2-2) and went to third on a double by Utley. Ryan Howard was then intentionally walked to load the bases and Frandsen was thrown out at home when Domonic Brown hit a grounder to first base.

That brought up Mayberry, who singled to left on a 2-2 pitch, making a winner out of Raul Valdes (3-2), who worked the top of the 11th. Five Philadelphia relievers worked one inning each and none of them allowed a hit.

Todd Frazier drove in all three Cincinnati runs, one with a groundout in the first and the other two with a double in the sixth. 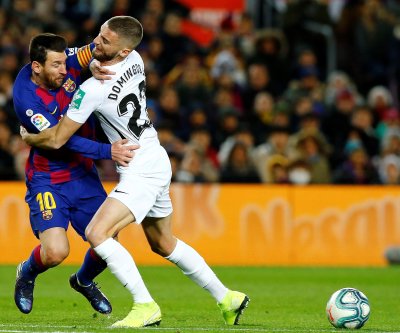