Forward Candace Parker (15) of the United States of America goes for the basket over forward/center Lauren Jackson (15) of Australia in the second half of the Women's Basketball semifinal at the London 2012 Summer Olympics on August 9, 2012 in London. UPI/Ron Sachs | License Photo

LONDON, Aug. 9 (UPI) -- Diana Taurasi brought Team USA to life early in the second half Thursday and the Americans rallied past Australia 86-73 in the Olympic basketball semifinals.

In a rematch of the last three gold medal showdowns, the United States trailed by 4 points at halftime and its 39-game Olympic winning streak in women's basketball appeared in jeopardy.

Taurasi then hit two 3-pointers over the first 2:10 of the third period to put the Americans in front, and they finally pulled away late to set up a gold medal game Saturday against France.

The United States' lead was still only 5 points during the early stages of the fourth period, but a 3-pointer by Sue Bird gave the Americans their first double-digit advantage of the game with 5:10 to go.

Taurasi and Tina Charles both scored 14 points for the United States and Bird had 13. The Americans were held to 45 percent shooting, but they forced 20 turnovers, seven more than they committed.

Australia was led by Elizabeth Cambage with 19 points.

The United States defeated Australia by 22, 11 and 27 points in the finals of the last three Olympics. The teams wound up meeting in the semifinals this year because the Australians were unable to win their group, finishing second to a French team that completed round-robin play unbeaten.

In the second semifinal, France got off to a quick start and eventually defeated Russia 81-64. France went unbeaten in group play with victories over Russia, Brazil and Australia. 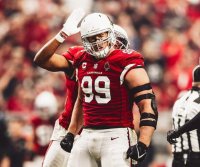