Dickey (11-1) became the first major league pitcher to reach 11 wins as he hurled his second one-hit, complete-game victory in a row -- the first pitcher to do so since Toronto's Dave Stieb in 1988.

The 37-year-old knuckleballer struck out 13 and allowed only Wilson Betemit's fifth inning single in dominating the Orioles, issuing two walks while lowering his ERA to a major league-best 2.00.

Davis broke a scoreless tie with his first career bases-loaded shot in the sixth inning for the Mets, who took the opener of a three-game series at Citi Field.

Second-place Baltimore fell 2 1/2 games behind the New York Yankees in the American League East with the loss and the Yankees' defeat of Atlanta. 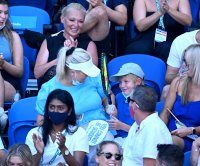