CHICAGO, June 8 (UPI) -- Jed Lowrie and Brian Bogusevic both had three RBI Friday in boosting the Houston Astros to an 8-3 victory over the Chicago White Sox.

The Astros had lost 10 of their previous 12 games, but came up with three homers and limited the damage while Chicago was producing a dozen hits.

Lowrie had a sacrifice fly in the first to put Houston in front for good and his two-run homer in the fifth gave the Astros a 4-0 advantage.

Bogusevic broke things open with a three-run homer in the ninth. Ben Wallace had a solo blast in the second for Houston, his first home run of the season.

Wandy Rodriguez (5-4) threw four shutout innings before running into problems, but escaped with the win by holding the White Sox to three runs on nine hits in 5 1/3 innings. Four relievers blanked Chicago the rest of the way while recording four strikeouts.

Gavin Floyd (4-6) allowed just four hits through six innings and struck out nine, but he was touched for four runs and suffered the loss. 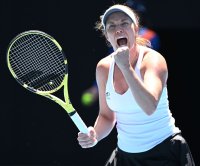