ST. LOUIS, Feb. 16 (UPI) -- Brian Elliott allowed a goal in the opening minute Thursday and was perfect after that in boosting the St. Louis Blues to a 5-1 win over the New York Islanders.

Elliott came into the game with the league's best goals-against average of 1.63 and helped lift the Blues within three points of Detroit for the best record in the Western Conference.

Frans Nielsen gave New York the lead 59 seconds into the contest and the Blues then got to Al Montoya for five goals on 26 shots.

Jason Arnott tied it with 5:20 to go in the first period and Kevin Shattenkirk put the Blues in front by scoring a power-play goal with 2:48 remaining.

St. Louis' other goals came in the second period from Andy McDonald, David Perron and T.J. Oshie. McDonald, who has missed almost all of the season due to a concussion, scored his first goal of the year.

Sports News // 15 hours ago
Masters golf: Matsuyama takes 4-stroke lead into final round
April 10 (UPI) -- Hideki Matsuyama went from sixth place to the outright leader of the 2021 Masters tournament with a 7-under par 65 in the third round Saturday at Augusta National Golf Club in Augusta, Ga. 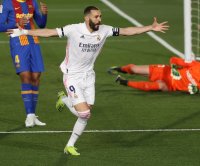