SUNRISE, Fla., Feb. 3 (UPI) -- Scott Clemmensen was called on to stop just 20 shots and allowed only a second-period goal Friday in leading the Florida Panthers past Winnipeg 2-1.

The Panthers, with their second straight win and third in four games, moved three points in front of Washington for the lead in the Southeast Division.

Sean Bergenheim scored the game-winning goal with 5:33 to go in the second period. Kris Versteeg put the Panthers in front on the power play late in the first, but Bryan Little briefly tied it in the second with his 12th goal of the campaign.

Versteeg has reached 20 goals in a season for the fourth time in his five years in the league and is two away from equaling his career best, set three years ago with Chicago.

Winnipeg has one more game to go on its six-game road trip, currently standing 2-3 on the journey.

Chris Mason allowed the two goals on 30 shots to take the loss. 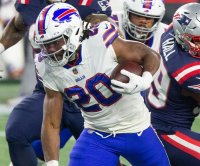