Trailing 2-1 in the seventh, Corey Hart smacked a two-out double off Phillies starter Vance Worley (11-2) and came home with the tying run when Morgan followed with his own two-bagger.

Braun then grounded a single up the middle, sending Morgan home with the go-ahead run.

Yovani Gallardo (16-10) earned the victory, yielding only two runs on three hits over seven innings and fanning 12 for the National League Central-leading Brewers, who salvaged one win in a four-game set against the Phillies and broke a five-game skid.

Francisco Rodriguez gave up a pair of hits but no runs in the eighth and John Axford survived a shaky ninth for his 42nd save.

Worley suffered his first loss in more than three months as the NL East-leading Phillies saw their six-game winning streak snapped. He ended up allowing three runs on eight hits over 6 2/3 frames.

Shane Victorino and Ryan Howard each hits sixth-inning solo homers to account for the Phillies' runs. 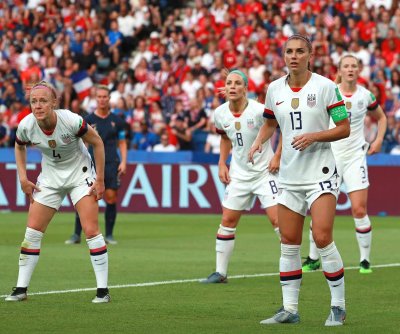 Soccer // 18 hours ago
U.S. women's soccer equal pay trial delayed due to pandemic
April 8 (UPI) -- The trial date for the equal pay lawsuit by the United States Women's National Team against the U.S. Soccer Federation has been delayed a month due to the coronavirus pandemic.

NBA // 21 hours ago
ESPN to broadcast H-O-R-S-E game with NBA, WNBA players
April 9 (UPI) -- ESPN is planning to televise a H-O-R-S-E basketball competition with players from the NBA and WNBA, as well as former NBA stars during sports' hiatus due to the coronavirus pandemic.