TALLAHASSEE, Fla., Sept. 5 (UPI) -- A 20-year-old woman was being held on a first-degree murder charge in the stabbing death of a member of the Florida A&M women's basketball team, police said.

Tallahassee police said they arrested Starquineshia Palmer in the slaying of Shannon Washington, who was stabbed with a kitchen knife in the neck and back early Sunday during an argument, the Tallahassee Democrat reported.

Police said Palmer apparently had been in a relationship with Washington, 20, and had been visiting Washington at her apartment.

Friends, family, teammates and other students gathered for a vigil for Washington Sunday at the Florida A&M campus.

"Our hearts and prayers go out to Shannon's family and members of the Lady Rattlers basketball team," university President James H. Ammons said. "For Shannon to be killed in the prime of her life is tragic and senseless.... This is a great loss for the university and our athletic program."

Washington, a Sarasota native, transferred to Florida A&M after earning All-American honors in her two seasons at Illinois Valley Community College, where she averaged 19 points a game last season, and was expected to play shooting guard this year.

"As a coach, this is the kind of incident you just hope you never have to deal with -- the death of one of your players at such a young age," women's basketball Coach LeDawn Gibson said.

NBA // 2 hours ago
Heat's Tyler Herro out for Game 4 vs. Celtics
MIAMI, May 23 (UPI) -- The Miami Heat will be without guard Tyler Herro for Game 4 of the 2022 Eastern Conference finals, the team said Monday. Herro sustained a groin injury in Game 3.

Sports News // 2 hours ago
Justin Thomas lauds golf team for PGA Championship win, expects Pereira rebound
May 23 (UPI) -- Justin Thomas used all resources available for his historic rally at the 2022 PGA Championship, including his golf pro father, his un-retired caddie and motivation from friend Tiger Woods for what he called a "team win." 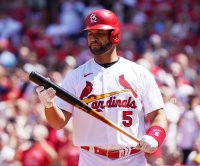 MLB // 7 hours ago
Cardinals' Albert Pujols homers twice, nears Alex Rodriguez on all-time list
May 23 (UPI) -- Albert Pujols hit two home runs in an 18-4 St. Louis Cardinals blowout of the Pittsburgh Pirates. The duo of dingers brings the future Hall of Famer to within 13 homers of Alex Rodriguez for fourth in MLB history.

NHL // 8 hours ago
Stanley Cup playoffs: Kane's hat trick helps Oilers take series lead vs. Flames
May 23 (UPI) -- Veteran winger Evander Kane logged a second-period hat trick to lead the Edmonton Oilers to a 4-1 win over the Calgary Flames in Game 4 of the second round of the 2022 Stanley Cup playoffs. 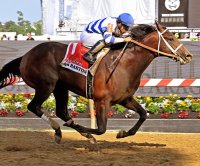 Sports News // 8 hours ago
Top-level racing from Ireland to Kentucky to Hong Kong surrounds Preakness
May 23 (UPI) -- While Early Voting stole the weekend limelight with his Preakness Stakes win, there was plenty of other stardom on display in weekend horse racing, including the 3-year-old filly Stars on Earth in the Japanese Oaks.

NBA // 8 hours ago
Wiggins dunk on Doncic highlights Warriors playoff win vs. Mavericks
May 23 (UPI) -- The Golden State Warriors overcame a 40-point effort from Dallas Mavericks star Luka Doncic to take a 3-0 lead in the Western Conference finals. Andrew Wiggins headlined the win with a highlight-reel dunk on Doncic. 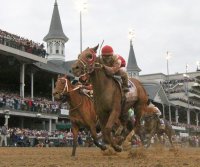 Sports News // 8 hours ago
Triple Crown becomes tale of rest rather than racing
May 23 (UPI) -- With horses dropping in and out of the competition from race-to-race, this year's Triple Crown series seems to emphasize rest over actual racing and the "trail" has turned into a maze.

Sports News // 19 hours ago
Golf: Thomas edges Zalatoris in playoff for PGA Championship title
May 22 (UPI) -- Justin Thomas beat Will Zalatoris by one stroke in a three-hole playoff to claim his second career major title at the 2022 PGA Championship on Sunday at Southern Hills Country Club in Tulsa, Okla.