The Blue Jays overcame a 3-1 deficit with their sixth-inning outburst and snapped Oakland's three-game winning streak.

Adam Lind led off the sixth with a double and Edwin Encarnacion drew a walk against Gio Gonzalez (9-10).

Colby Rasmus tried to lay down a sacrifice bunt and when he missed, Oakland catcher Kurt Suzuki tried to pick Lind off second base. The throw was wild, however, allowing both runners to move up.

Rasmus eventually walked to load the bases and Craig Breslow relieved Gonzalez. Aaron Hill greeted Breslow with an RBI single and, one out later, Lawrie homered to left on a 2-0 pitch.

The win went to Casey Janssen (4-0), who retired the only batter he faced after relieving Henderson Alvarez in the sixth. Alvarez, making his major-league debut, allowed eight hits and three runs.

David DeJesus and Josh Willingham both hit solo homers for the Athletics. 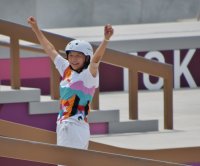