SUNRISE, Fla., March 17 (UPI) -- Sergei Samsonov touched off a three-goal second period Thursday that lifted the Florida Panthers to a 4-0 decision over Toronto.

Scott Clemmensen made 24 saves to pick up his first shutout of the season and slow down Toronto's push for a playoff berth. The Maple Leafs remained four points behind idle Buffalo for the eighth and final post-season spot in the Eastern Conference.

After a scoreless first period, Samsonov scored on a slap shot 49 seconds into the middle stanza and the Panthers then produced power-play goals by Stephen Weiss and Mike Santorelli.

Keaton Ellerby added an empty-net goal with 3:24 to play in the third.

Jean-Sebastien Giguere made 22 saves for Toronto in his first start since Feb. 16. Toronto rookie James Reimer had started in goal for 13 straight games.

The Maple Leafs had put together a 5-0-2 record in its last seven road contests. 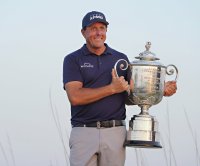 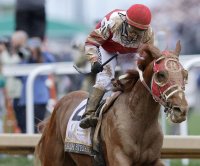 NBA // 2 days ago
Mavericks' Luka Doncic nets 33 to force Game 7 vs. Suns
May 13 (UPI) -- All-Star guard Luka Doncic scored a game-high 33 points to lead the Dallas Mavericks to a blowout win over the top-seeded Phoenix Suns in the Western Conference semifinals, forcing a Game 7 in the best-of-seven series.

NFL // 3 days ago
2022 NFL schedule release: Bills-Rams to kick off season; Broncos-Seahawks on 'MNF'
May 12 (UPI) -- The NFL will open its 2022 regular season inside Los Angeles' SoFi Stadium, as the defending Super Bowl champion Rams will host the Buffalo Bills on Thursday, Sept. 8.
Advertisement