MONTREAL, Jan. 22 (UPI) -- Bobby Ryan scored a goal in regulation and netted the shootout winner Saturday, enabling the Anaheim Ducks to snatch a 4-3 victory over Montreal.

Ryan, Cam Fowler and Corey Perry all scored for the Ducks, who carried a 3-1 lead going into the third period, but couldn't hang on to the advantage, sending the game into a scoreless overtime and a shootout.

After Ryan bested Corey Price in the third round of the tiebreaker, Brian Gionta's last chance for the Habs missed the net and the Ducks registered only their fourth win in 10 road games.

Jonas Hiller made 37 saves for Anaheim.

Max Pacioretty scored twice, including the tying goal with only 13 seconds left in regulation, for Montreal.

Mathieu Darche added a third-period goal and Price ended up making 23 saves for the Canadiens, who honored former captain Saku Koivu -- now a member of the Ducks -- back to the city for the first time in an opponent's uniform.

NFL // 9 hours ago
Jets QB Zach Wilson leaves Week 7 game with knee injury
Oct. 24 (UPI) -- Rookie quarterback Zach Wilson sustained a right knee injury in the second quarter of the New York Jets' loss to the New England Patriots on Sunday in Foxborough, Mass., and did not return to the game. 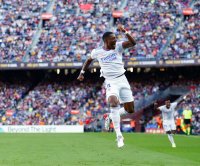 Soccer // 11 hours ago
Soccer: Real Madrid beats Barcelona in El Clasico
Oct. 24 (UPI) -- David Alaba and Lucas Vazquez each scored to lead Real Madrid to a 2-1 win over rival Barcelona in the first edition of El Clasico of the 2021-22 season Sunday in Barcelona, Spain.