The Predators faced a one-goal deficit heading into the final period, but Sergei Kostitsyn tied it and Wilson delivered the game-winning score just 44 seconds later.

Anders Lindback, who has been getting the playing time for Nashville since Pekka Rinne suffered a knee injury this month, made 25 saves. Lindback is 5-0-1 since Rinne went out.

Nashville has won four in a row, its longest winning streak of the season. 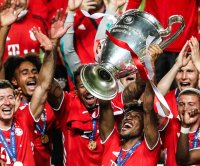 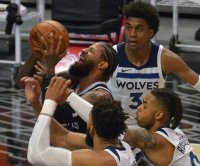 NBA // 3 hours ago
Heat's Bam Adebayo sinks buzzer beater vs. Nets
April 19 (UPI) -- All-Star forward/center Bam Adebayo took his defender off the dribble, bullied his way into the paint and drained a jump shot at the buzzer to lead the Miami Heat to a 109-107 victory over the Brooklyn Nets in Miami.

Sports News // 4 hours ago
Baffert-trained Concert Tour, two others drop out of Kentucky Derby
April 19 (UPI) -- Million-dollar races at Oaklawn Park produced a big upset and a potential star for the remainder of the year in highlights of horse racing this weekend.

NFL // 13 hours ago
Trevor Lawrence, Jaguars' likely No. 1 pick, donating $20K to Jacksonville charities
April 18 (UPI) -- Former Clemson Tigers quarterback Trevor Lawrence, who is expected to be the Jaguars' pick at the top of this month's NFL Draft, and his wife, Marissa, plan to donate $20,000 to charities in Jacksonville.