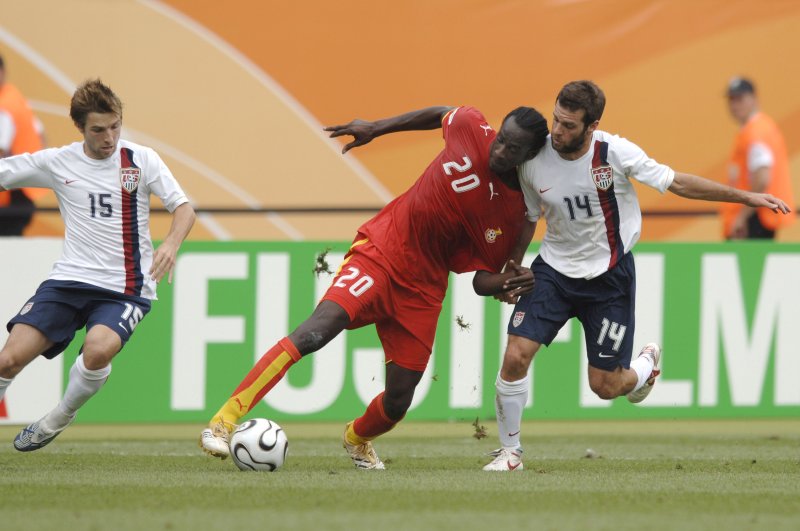 Ben Olsen (R), is shown June 22, 2006, as a member of the United States Soccer team in the World Cup. Bobby Convey of the U.S. is at left and Otto Addo of Ghana is in the middle. (UPI Photo/Frank Hoermann) | License Photo

Olsen, 33, is the youngest full-time head coach in the history of the league, which was formed in 1993. He succeeds Curt Onalfo, who was dismissed Aug. 4 with the team sitting at 3-12-3.

D.C. United officials had previously said Olsen, who compiled a 3-8-1 record as interim coach, did not have enough experience for the permanent job.

"We spent a great deal of time on this decision and interviewed a number of qualified candidates," D.C. United Chief Executive Officer and President Kevin Payne said.

"The more we talked about what we were looking for in the next coach of D.C. United, the more we talked about Ben Olsen as a candidate for the job, in spite of our prior public stance," Payne said. "Ultimately, we became convinced that Ben's commitment, intelligence and understanding of what it means to be a part of D.C. United outweighed his limited coaching experience."

Olsen, who played for United for 12 years following a stellar career at the University of Virginia, was an assistant under Onalfo after ending his playing career in November 2009.

"This club means a great deal to me from my playing days and to be asked to lead the team is an honor," Olsen said. "I'm extremely excited and plan to prove that I was the right choice for this position."

Sports News // 2 days ago
Ohio Derby, Irish Derby, Breeders' Cup qualifiers in 3 countries on weekend card
June 24 (UPI) -- Weekend horse racing has an international flavor with top races on three continents, but much of it points back to November's Breeders' Cup World Championships in the Kentucky Blue Grass.