NEW YORK, Feb. 15 (UPI) -- Tampa Bay forward Steven Stamkos, who led the NHL with nine points last week, was selected the No. 1 star of the week by the league.

Joining Stamkos for honors earned in games played Feb. 8-14 were goaltenders Michael Leighton of Philadelphia and Marty Turco of Dallas.

Stamkos had at least two points in each of the Lightning's four games last week. His three goals and six assists moved him into fourth place in the NHL in goals (35) and points (70) this season.

He has at least one point in each of his last 13 games, tied with Pittsburgh's Evgeni Malkin for the longest active streak in the NHL.

The Flyers went 4-0-0 last week behind Leighton with home-and-home sweeps of New Jersey and Montreal. He had a 1.98 goals-against average in those games and is 12-3-1 since joining Philadelphia in mid-December. 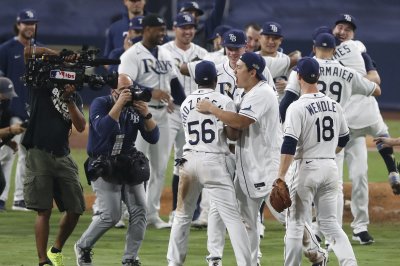