Jonathan Toews scored within the first minute of the game and sent the Blackhawks on their way to their fifth win in their last seven games.

Fernando Pisani and Ryan Potulny scored for Edmonton, which has yet to win in 2010. Jeff Deslauriers recorded 33 saves.

After Toews opened the scoring 44 seconds into the game, Chicago built a 4-0 lead with a trio of goals in the second period. Brouwer scored on a one-timer at 5:50. He was followed by Byfuglien at 10:14 and Hossa's power-play goal at 13:53.

Chicago had two power plays in the game. Edmonton had just one.

Pisani got Edmonton on the board at 19:20 of the second period. Potulny scored at 5:44 of the third period on a Chicago turnover. 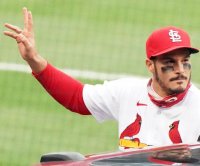