Randy Winn had three hits and scored twice and Nate Schierholtz hit a two-run double for the Giants.

Gary Sheffield drove in the lone run and Cory Sullivan had two hits and scored for the Mets. 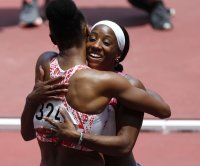